Irish consumer sentiment tumbles in October to lowest level since May

Sharp drop contrasts with slight improvement in comparable US indicator

Irish consumer sentiment tumbled in October on sharply increased concerns about the potential impact on household finances and jobs of a renewed surge in Covid-19 cases and the prospect of related restrictions on economic activity. In a notably downbeat survey reading, one small positive was a relatively limited downgrade of household current finances and spending plans that suggests fear rather than fatalism is gripping Irish consumers at present.

The KBC Bank Ireland consumer sentiment index fell to 52.6 in October from 60.7 in September and now stands at the lowest level since May. The monthly drop of 8.1 points in October is the second largest in the past year, albeit broadly similar to the initial reaction to the pandemic in the March survey (-7.9 points) and dwarfed by the decline in the April survey (-34.7 points)in the wake of the first ‘lockdown’.

The current level of the sentiment survey points to a very nervous Irish consumer. All five elements report markedly more negative than positive responses. Some further perspective on the degree of discomfort is suggested by the fact that, apart from the slump seen in April/May, it is the lowest level of the sentiment survey since December 2012 and in the bottom 10 per cent of readings in the near twenty five years of the survey.

As the diagram below illustrates, the decline in Irish consumer sentiment in October contrasts with a modest rise in the preliminary reading of the comparable US confidence measure which increased to 81.2 from 80.4. In the Euro area, the preliminary reading of consumer confidence fell in October but the decline from -13.9 to -15.5, a somewhat smaller drop than seen in the Irish survey. As noted earlier in the year and illustrated in the diagram below, US consumers have proven less sensitive to adverse news in relation to the Coronavirus and appear more focussed on a significant if uneven rebound in the US economy and a notably more pronounced improvement in asset prices. 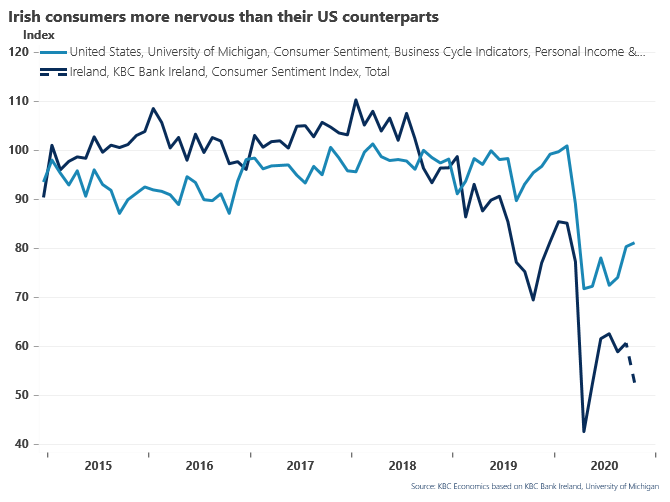 All five elements of the KBC Bank Ireland sentiment survey were weaker in October than in September. The largest weakening was seen in consumers’ expectations for their financial circumstances over the next twelve months and likely reflects increased nervousness about the lasting impact of the coronavirus and related restrictions on economic activity on income prospects.

It should be noted that those surveyed after Budget ’21 were marginally less negative about the outlook for household finances than those who responded before the Budget. As there was a progressive deterioration in health-related news through the survey period, this might suggest some modest positive impact on consumer confidence from the measures announced in Budget ’21.

The October survey also saw consumers mark down the outlook for the jobs market substantially. In circumstances where many recent economic releases have been positive, this likely reflects the expected impact on employment of localised ‘lockdowns’ in recent months and the growing  prospect of a more generalised increase in restrictions through the survey period. It would appear that consumers sense a very palpable link between lockdowns and layoffs.

Again, at the margin, slightly less negative responses in the aftermath of the Budget might suggest consumers drew some measure of encouragement from the shape and scale of Budget measures to support employment in the Irish economy in 2021. This would seem to accord with our previous assessment that while the stance of fiscal policy in Budget ’21 was entirely appropriate, a somewhat larger size of stimulus might have offered greater support both in signal and substance to Irish consumer sentiment and spending through the remainder of this year and into next. Importantly, this might suggest fear rather than fatalism is gripping Irish consumers and holds out scope for a positive response to further supportive measure in the future.

The slightly smaller weakening in October survey responses in respect of broad economic prospects relative to jobs is partly due to the more deeply entrenched negativity in regard to the general economic outlook in recent months. However, the more notable aspect is that responses to both ‘macro’ elements of the survey, while marginally better than those seen in April when the pandemic first struck, are at historically weak levels for the survey.

Although all elements of the survey weakened in October, the decline in households’ assessment of their financial circumstances through the past twelve months and their spending plans was significantly less than that seen in other components. This more muted weakening in household financial circumstances may owe something to the scale of newly introduced state income supports and, for some households, a build-up in savings in recent months.

Encouragingly, this also fed into a comparatively small pull-back in spending plans. So, a silver lining in the October survey may be signs of resilience in buying power that might suggest the possibility of a significant bounce back in consumer spending in the final weeks of the year.