Irish consumer sentiment worsened for the fourth month in a row in May as concerns around the cost of living continued to build and worries about a global recession intensified.

The recent trend in the confidence survey suggests Irish consumers are attempting to adjust to an altogether more painful reality in terms of their immediate circumstances and the broader economic environment  than appeared remotely possible a few short months ago.

The KBC Bank Ireland consumer sentiment index slipped to 55.5 from 57.7 in April. While that 2.2 point decline was notably smaller than in any of the three preceding months, it remains the case that consumers feel that both the current conditions they face and the outlook they expect continue to deteriorate.

The continued slippage in the sentiment index suggests consumers are still trying to assess both the extent and duration of the worsening in economic conditions at home and abroad.

It is unusual but not unprecedented for confidence to drop for four months in a row as the diagram below indicates. The previous four occasions this has happened in the twenty six year history of the survey reflected circumstances in which consumers faced marked difficulties in assessing potentially momentous changes in economic conditions. 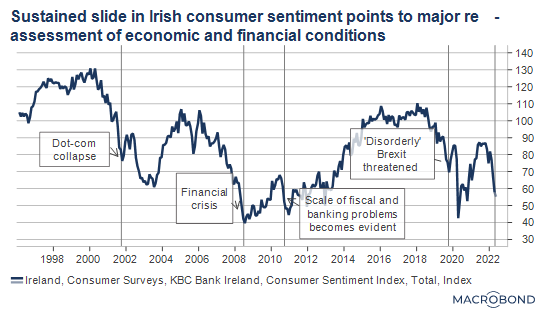 The most recent occasion that Irish consumer sentiment slipped for four consecutive months was in the summer of 2019 when it appeared a chaotic and very damaging Brexit was threatened.

Prior to that, it was when the scale of potential damage caused by the financial crisis seemed to crystallise in the summer of 2010.

Before that, it was when the global financial crisis loomed large in the first half of 2008 and the first time the sentiment index fell for four months running was when the Dotcom bubble burst in 2001.

Judged from this perspective, it would seem that Irish consumers are still trying to properly assess how large and how lasting the current pressures-largely centred on surging inflation, may prove to be.

The sense of a marked change in both the macro climate and households' own financial circumstances can also be gleaned from a comparison of this month’s reading -which represents a 19 month low for the index, with that of a year ago, when the May 2021 posted a 23 month high.

If the worries signaled by Irish consumers in the May sentiment survey are substantial, they appear notably less severe than those evident in the GFK consumer confidence measure for the UK which fell to an all-time low this month (in a series that stretches back to 1974).

As the diagram below illustrates, the drop in UK consumer confidence in the past twelve months has been roughly twice as large as that seen in Ireland. This likely owes much to a sharper deterioration in inflation and a poorly received policy response both in terms of earlier and poorly signaled rate increases by the Bank of England, accompanied by confusing commentary by senior officials as well as the introduction of some income-reducing fiscal measures (although some fiscal reliefs are set to be announced in coming days).

Both in terms of substance and signaling, domestic policy measures appear to have amplified rather than offset the difficulties now facing UK consumers. 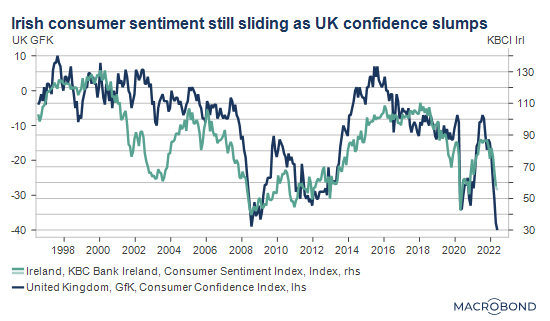 The decline in Irish consumer sentiment in May reflected relatively modest downgrades to most elements of the index. This seems consistent with developments during the survey period that saw a further confirmation of existing pressures rather than the emergence of  new sources of difficulty.

The weakening trend in sentiment in recent months suggests Irish consumers had already braced themselves for a lot of bad ‘macro’ news. So, it is not entirely surprising that, although sentiment weakened in May, the deterioration in thinking, both in regard to the broad economic outlook and job prospects, was reasonably limited.

With consumers' own eyes confirming widespread media reports that pointed towards continuing upward pressure on living costs, it is not unreasonable that thinking in relation to household finances worsened  somewhat more than ‘macro’ views. The clear signalling from numerous ECB policymakers of late of imminent increases in borrowing costs may have further weighed on some Irish consumers’ assessments of their own financial circumstances.

Encouragingly, the one element of the survey that showed an improvement in May compared to April was the buying climate. Although this owed something to the exceptional scale of pull-back in this element in recent months, it could also hint at some resilience as well as resources that mean Irish consumers will slow rather than stop spending in coming months.

The May consumer sentiment survey contained a special section examining Irish consumers holiday spending plans. We asked a similar question a year ago and responses for the two years are presented in the table below.

The table above shows a sharp decline in the number of consumers who are not planning to take a holiday this year for reasons other than cost. This seems consistent with a sharp easing in Covid-related concerns that means travel is seen to be much safer from a health perspective than a year ago.

Given the degree of pressure on living costs at present, the increase in the number of consumers who say they cannot afford to go on holiday is relatively modest, to 23% of those surveyed in May 2022 from 19% a year ago. This  likely owes something to financial resilience but it could also be that many consumers are placing a greater priority on 'getting away from it all' in their household budgeting because of greater pressure in their everyday lives of late.

That said, at almost 1 in 4 consumers, the survey does suggest a substantial portion of Irish consumers feel that a holiday is out of reach financially for them. However, the limited change in this number from last year suggests that this is a persistent problem rather than one sparked by the recent surge in inflation. In the same vein, there is no increase in the number of consumers planning to materially curb their holiday spending this year.

While the most common response of those planning a holiday was to spend roughly the same as last year, the survey suggests that many Irish consumers have factored in higher holiday costs in their spending plans.

This would also seem consistent with the view that many see a holiday break as an important priority in their household spend this year. However, the sharp increase to 8% from 5% in numbers planning to spend more than 20% extra on holidays in 2022 than in 2021, most likely includes some who spent nothing on holidays last year because of Covid concerns. Likely more telling comparisons are the increase from 8% to 11% in the number of consumers planning to spend up to 10% more this year.

The resilience in planned holiday spending suggested in these numbers likely reflects several factors. Clearly, the opening up of travel after a couple of years of significant curtailments is one element.

Finally, for some consumers, the driving factor may be the nature and extent of current pressures that is intensifying the need to get away from it all (Eat, drink and see Kerry. For tomorrow, we….).