Confidence recovers in March as Irish consumers focus on post-pandemic improvement in economy and jobs, but household savings likely to remain higher in future

Irish consumer sentiment improved to its best level in twelve months in March. This hints at an increasing sense of economic and financial resilience to Covid-19 on the part of Irish consumers. The concentration of gains in the forward-looking elements of the survey probably reflects a sense of emerging light in a still dark tunnel amid hopes that the roll-out of vaccines will deliver notably healthier domestic economic conditions later this year.

Increased consumer confidence in March was driven by a further easing in concerns about the outlook for the Irish economy and jobs likely prompted by positive economic data and the promise of increased vaccinations. However, consumers remain cautious about their own financial circumstances and are correspondingly careful in their spending plans.

A special question in the March sentiment survey also suggests the likelihood of a tendency towards permanently higher savings in the aftermath of the pandemic that may limit the extent of an re-opening rebound in consumer spending. Marked differences in consumers capacity to build savings that saw these concentrated towards higher income consumers also emphasise the uneven distribution of pandemic impacts across the economy.

The KBC Bank Ireland consumer sentiment index rose for to 77.1 in March from 70.8 in February. This second month on month gain not only reverses the sharp fall in January data on the dramatic increase in Coronavirus cases and related restrictions on activity but also brough the sentiment index to its highest level since March 2020.

As the diagram below illustrates, this leaves the current reading still some distance below the long term series average. In that respect, the latest reading suggests an increased capacity to handle the economic and financial fall-out from the pandemic predicated on the expectation that some element of normalisation is not too far away.  However, this doesn’t mechanically translate into expectations of a return to a boom-time economy. 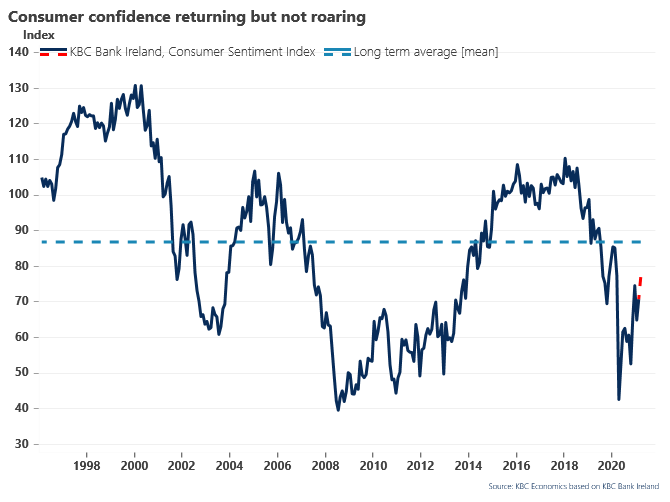 The strongest monthly improvements in the March report were seen in the forward-looking elements of the survey dominated by the twelve month outlook for Irish economic activity and jobs. The release of data showing Ireland bucked the international trend by reporting positive GDP growth in 2020 allied to a diverse range of new investment and job announcements during the survey period undoubtedly supported more positive readings in these elements of the survey.

Supportive policy announcements in the shape of a substantial fiscal package in the US and a step-up in ECB bond buying may also have assisted but the major contribution to improved sentiment may have come from increased expectations in relation to the future roll-out of vaccines and the associated opening up of domestic economic activity. The survey period also saw some further albeit modest easing in the trend in new virus cases from the elevated levels prevailing around the turn of the year.

The two ‘macro’ elements of the March sentiment survey showed a marked monthly improvement that brought them back to levels prevailing in February 2020. This suggests Irish consumers have significant confidence in the capacity of the Irish economy to weather Covid-19 related impacts. However, it remains the case that sentiment towards the Irish economy remains relatively subdued as pre-pandemic confidence readings encompassed major worries about Brexit.

Roughly one-in-four consumers expects the Irish economy to strengthen in the coming year but this is about half the number that expect further weakness. Encouragingly, views on the outlook for jobs are more positive in that the numbers of consumers expecting stronger and weaker unemployment in twelve months’ time are roughly equal.

Views in relation to household finances remain notably more guarded than thinking on the broader Irish economy even though the March report saw some improvement in these parts of the survey, these readings are considerably below those seen prior to the pandemic. It also remains the case that, both in terms of the experience of the past twelve months and expectations for the next twelve months, negative responses substantially outnumber positive ones.  In turn, spending plans remain subdued.

These results suggest that Irish consumers remain concerned that while the economy as a whole may weather the pandemic, the fallout in terms of household finances for individual consumers may be more painful and persistent. This might reflect worries about poorer income or stronger inflation trends as domestic sectors re-open and the economy normalises.

It could also capture nervousness about an eventual shift in the fiscal stance towards some measure of ‘austerity’. In this respect, the breakdown of the March survey results may reveal a continuing tendency towards a ‘Father Dougal’ view of Irish economic recoveries on the part of Irish consumers in that for some any gains are really small while for others they are far away.

The March sentiment survey also contained a special question on savings plans. With a significant build-up in savings in the past year, the use to which these funds are put will play an important role in determining the scale and speed of a rebound in consumer spending in 2021 as the domestic economy re-opens and ‘social consumption’ activities curtailed by social distancing return.

Irish household deposits data for January 2021 show a twelve month increase of €15bn compared to a €7bn increase in the previous twelve months. That scale of that acceleration likely reflects both fear and forced savings as increased uncertainty bred caution and health-related restrictions curbed spending options.  As the overall drop in Irish consumer spending in 2020 was €9bn, how much of that increased €8bn of household deposits is spent in 2021 will play a key role in determining whether the expected rebound in spending amounts to a bounce or a boom.

The critical question is whether the experience of the pandemic-either because of a need to cope with a more uncertain economic and financial environment or simply that spending foregone because of social distancing may not have been missed as much as expected- could prompt a permanent step-up in savings. An alternative view is that the re-opening up of various sectors may see the explosive release of pent-up demand.

Responses to a special question added to the March sentiment survey suggests that additional savings in 2020 were concentrated among higher income and more financially comfortable consumers. Some 35% of consumers questioned say that they did not build up any additional deposits with this share rising notably for lower income and financially strained consumers. These responses underscore the uneven nature of pandemic impacts across Irish households and the broader Irish economy.

22% of households say they will set aside these additional savings for emergencies while a further 9% will put them towards a particular future outlay such as home purchase or renovation, or education. As such responses were notably more common among higher income or financially comfortable consumers, these shares are likely to represent lower bounds of the amounts of increased deposits that will be directed towards these purposes. 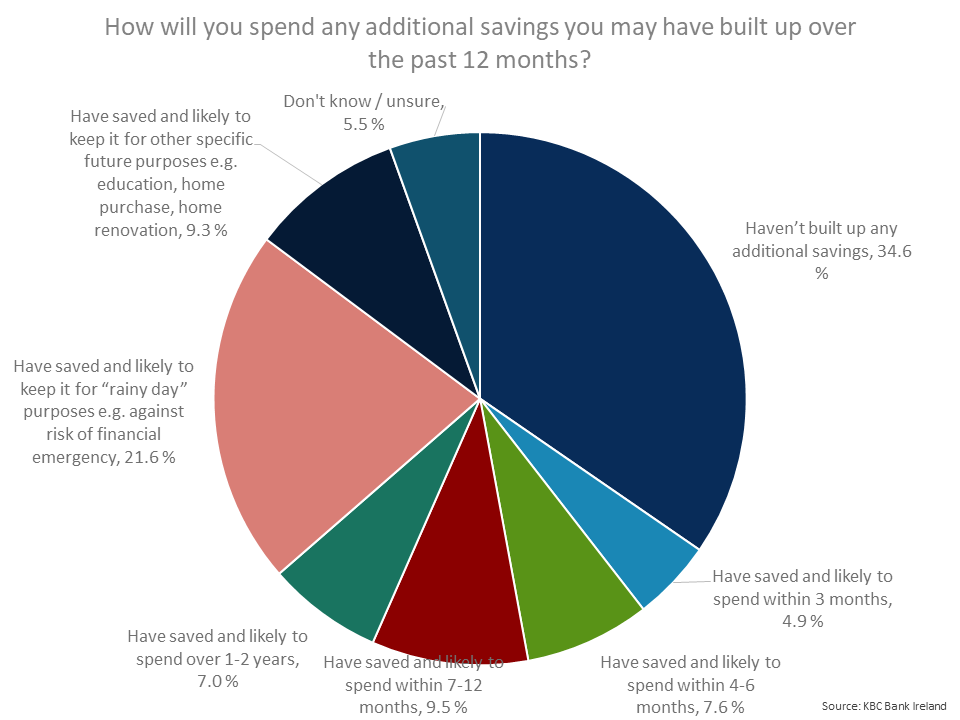 As the table shows, roughly 23% of consumers envisage spending their additional savings within the next year, implying a substantial uplift rather than a surge in spending power from this source at the macro level in 2021 (KBC Bank forecasts envisage an increase in consumer spending of about 7% in 2021 following a 9% drop in 2020).  Of course, for individual sectors and businesses, even very small portions of those savings being recycled into spending would dramatically alter the outlook for the coming year.