……while consumers see growth, income gains and higher property prices in the post-pandemic Irish economy of 2027

Irish consumer sentiment recovered in January as concerns about the severity and length of difficulties posed by the Omicron variant of the Coronavirus eased and prompted a reversal of most of the weakness seen in the December reading.

The improvement in Irish consumer confidence in January contrasted with further weakness in the US and the Euro area. In part, this reflects greater earlier caution on the part of Irish consumers but it also likely owes something to increasingly positive commentary on the outlook for the Irish economy.

The KBC Bank Irish consumer sentiment index increased to 81.9 from 74.9 in December, largely reversing the sharp drop last month from the November reading of 83.1. At current levels, Irish consumer confidence is still marginally below the long-term (26 year) average of the series. So, it still speaks of a reasonably cautious Irish consumer but, importantly, one who is not insensitive to emerging positive news.

As the survey was completed by January 15th, it doesn’t capture the substantial removal of health-related restrictions announced on January 21st. This, together with the positive tone of the January sentiment survey’ suggests scope for a marked further improvement in Irish consumer confidence in February on what amounts to the effective re-opening of many entertainment and hospitality focussed sectors.

As the diagram below illustrates, the improvement in Irish consumer sentiment in January coincided with a further modest weakening in sentiment in similar indicators for the US and Euro area. As the diagram shows, confidence among Irish consumers was harder hit by the pandemics than elsewhere. More recently, US consumers have been more focussed on a difficult path out of the pandemic centred on a jump in US inflation to a near forty year high of 7%.

In a somewhat similar vein, Euro area consumers appear to have been quicker than their Irish counterparts to declare an end to pandemic concerns and reacted more adversely to the pandemic. As a result, the combination of increased infection rates and sharply higher living costs have taken a significant toll on confidence of late. 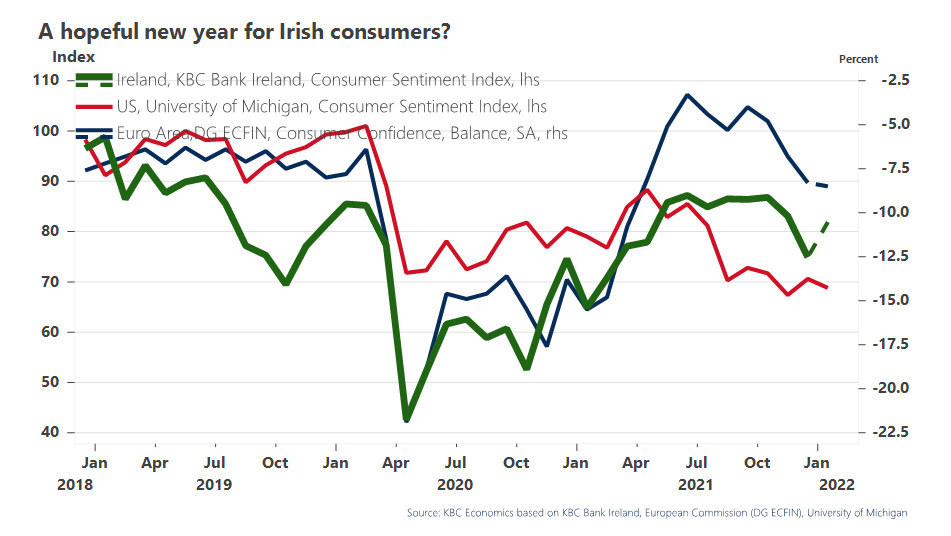 The recovery in Irish consumer sentiment in January largely represented a reversal of the weakening seen in December when the emergence of the Omicron variant seemed to threaten a return to large losses in terms of health as well as economic and financial outcomes. As a result, the ‘macro’ components of the survey which saw the most severe weakening in December registered the most significant gains in January.

Our sense is that the turnaround in these areas was helped notably by very encouraging end-year exchequer returns and unemployment data released early in January that highlighted the exceptional resilience of economic activity and the jobs market. At the margin, these elements may also have benefitted from some normal seasonal respite over the Christmas/new year period from the daily torrent of economic concerns that usually but not always (January 2021 being a notable Covid-related exception) sees the January survey improve relative to December.

Smaller monthly gains in the January survey in those elements focused on household finances were sufficient to push them above their November readings although spending plans remained marginally weaker perhaps reflecting both the recent step-up in living costs and continuing caution in respect of a still unclear economic and financial future.  Again, while we expect strong growth in consumer spending in the coming year, the relatively guarded tone of the sentiment survey would argue against expectations of a frenzied consumer boom in 2022.

The Irish economy in 2027; what might the next five years mean for growth, incomes and house prices?

The KBC Bank consumer sentiment survey for January also contained a number of supplementary questions focused on the somewhat longer outlook for the Irish economy, for household incomes and for house prices. The intention of these questions was to move beyond immediate considerations of Covid-19 and its impacts  and assess consumer thinking as to the expected health or otherwise of a post-pandemic Irish economy.

Diagram 1 shows the survey suggests consumers hold a broadly positive outlook for the Irish economy, with more than twice as many consumers (47%) seeing stronger conditions than the number expecting weak conditions (22%). 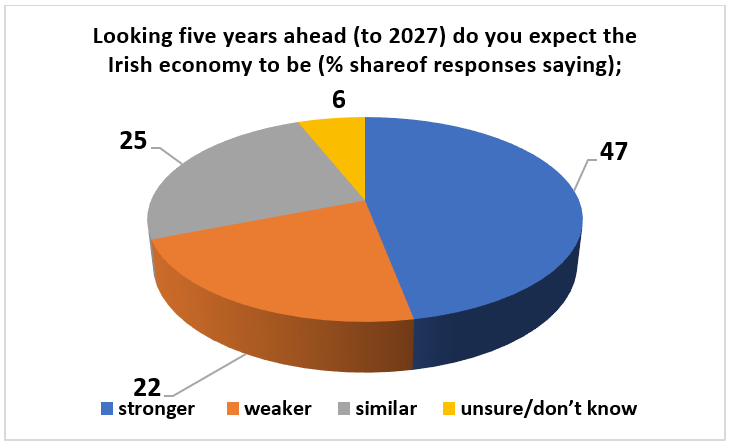 Looking inside the aggregated responses, expectations for a stronger economy are shared across all demographics but optimism is more pronounced among Dublin consumers than elsewhere, among males more than females and, perhaps not surprising given the direction of travel in the Irish economy, is also positively correlated with education and current financial health.

Perhaps surprisingly, consumers aged 25-34 are notably more positive about the economic outlook than their slightly older siblings (35-44) who are least positive, with middle aged consumers generally less upbeat but then a marked shift occurs as older consumers (65+) report the most positive five year outlook for the economy of all. We might speculate that this reflects, in turn, the optimism and opportunities of youth, the job constraints and cost burdens of middle age and some element of renewed positivity in later life (This might seem consistent with a 2007 study by Blanchflower and Oswald that suggests well-being is u-shaped over the life cycle.)

The January survey also asked consumers about their expectations for the evolution of their own household finances over the next five years. The results shown in diagram 2 reveal a still broadly positive outlook but fewer consumers see either gains (39%) or losses (16%) than report positive or negative views on the broader economic outlook. Perhaps not surprisingly, those under most financial pressure at present were far more likely to see their incomes declining further but  gaps based on gender or geography were far more limited. 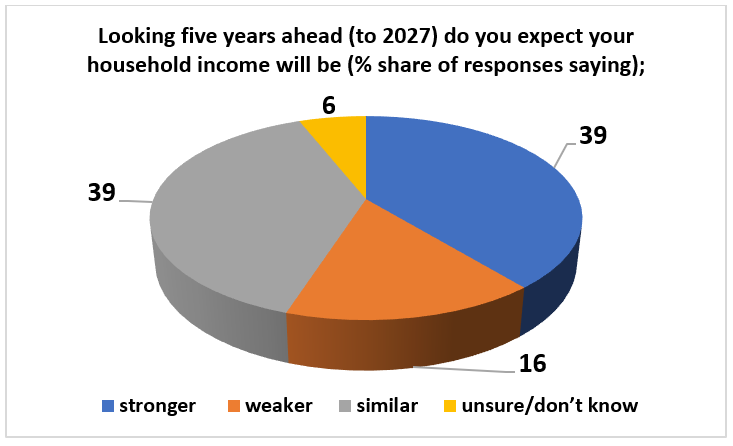 Possibly the most notable feature of the responses in relation to household incomes was a marked age-based divergence. Among those aged under 35, positive answers in regard to expected income growth were markedly more prevalent than among older age groups. The positive balance decreased steadily among those aged 35 to 44 and those aged 45 to 54.

However, a majority of those aged 55 and older see their incomes declining in the next five years. Presumably, this largely reflects lower and even declining incomes after retirement although it also chimes with a number of studies that suggest earnings growth may peak between mid-40’s and mid-50’s (that either contradicts the Blanchflower study referred to above or suggests the link between income and well-being is not entirely straightforward).

The January survey also asked consumers how they expected the level of Irish house prices in five years’ time would compare to their current levels.  As diagram 3 below indicates, the overwhelming view is that house prices will continue to rise over the next five years. Munster consumers tend to be somewhat more positive in their expectations for house prices while expectations of price increases were also stronger among males than females. 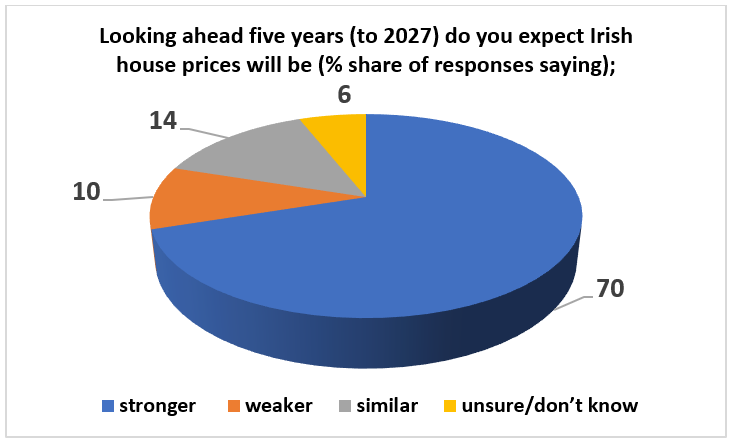 Expectations of price growth were slightly less pronounced among those aged between 25 and 44, somewhat elevated among those aged between 55 and 64 and strongest among the over 65’s. Although the majority in younger age groups expecting higher prices is slightly less than in older age groups, it remains at a margin of slightly over 4 to 1. Moreover, almost 30% of consumers in these age groups expect prices to increase substantially in the next five years.

The message of the five year outlook of Irish consumers is solidly positive in terms of expectations for the economy as a whole as well as for income growth. These elements in themselves would also likely be supportive of sustained growth in house prices.

However, the extent of the expectations of property price growth in this survey seems indicative of a belief that the shortfall in supply will persist and these expectations also hint that widespread expectations that housing will be more expensive in the future may be an important driver of strong housing demand at present.