Irish consumer sentiment tumbled in August to its weakest level since November 2013 as the increasingly trenchant approach of the new UK government coupled with domestic estimates indicating the potential scale of job losses that might follow a ‘hard Brexit’ combined to undermine confidence in the outlook for the Irish economy and household finances.

The August sentiment data suggest that gloom is increasingly taking hold with fear now the dominant factor affecting consumer sentiment.It seems that Irish consumers are now preparing for the worst and no longer allowing themselves hope for the best in relation to Brexit.

In circumstances where consumer confidence indicators in a range of countries worsened in response to a general weakening in global economic prospects and the tougher line taken by the new UK prime minister, Boris Johnson suggested a larger likelihood that the UK would crash out of the EU, it is scarcely surprising that Irish consumer sentiment registered a sharp decline.

It seems we are seeing a stepped and staggered deterioration in Irish consumer confidence as a full realisation of the scale of problems posed by Brexit comes into sharper focus. As the diagram below illustrates, the large decline in Irish consumer sentiment in July and August 2019 can be seen as part of a sequence of Brexit blows to confidence.

The current weakening of sentiment is broadly comparable to the declines seen in 2016 around the UK referendum, again in summer 2018 when UK problems in terms of negotiating a smooth Brexit began to surface, again at the beginning of 2019 when Theresa May’s approach was floundering and now, when both the increased threat and  degree of damage that a ‘no deal’ Brexit might mean for Ireland became forcefully evident. 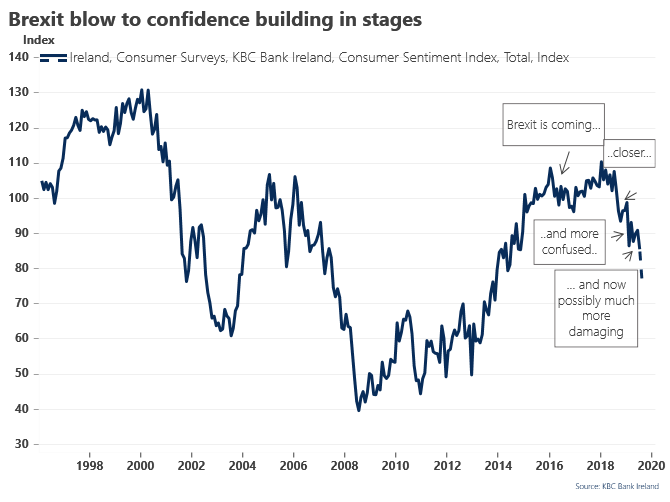 It should be noted that August was a wicked month for consumer confidence in a range of countries. In the US, consumer sentiment fell to its weakest level since 2012 as concerns mounted that the trade war between the US and China would see tariffs sharply boost the prices of a range of consumer goods.

In the Euro area, weakening economic growth and political tensions in a number of countries prompted a decline, albeit relatively modest, in consumer confidence. Brexit concerns were likely the main driver of a significant fall in consumer confidence although as we noted last month (see here) a number of factors appear to be limiting the degree of damage Brexit is currently having on sentiment.

The fall in Irish consumer sentiment was broadly based with all of the five main elements of the sentiment index recording clearly weaker readings for August than July. Far and away, the largest drop was seen in the jobs component of the survey where roughly one in two consumers now expects unemployment to rise in the next twelve months while just one in five sees a continuation of the improving trend of the last six years.
The particular weakness in sentiment towards jobs likely reflects the high profile Brexit warning given by the Central Bank during the survey that was widely reported to point towards employment being 34,000 lower over the next three years and 110,000 lower over ten years than would otherwise be the case. There were also some warnings of large scale job losses at power plants during the survey period that would also have weighed on sentiment in this area.

Not surprisingly, sentiment in relation to the general outlook for the Irish economy also took a tumble in August with just over half of those surveyed now expecting the Irish economy to weaken in the year ahead. However,  probably in response to the poorer jobs outlook, a larger decline was seen in expectations for household finances over the next twelve months. One in four consumers now sees their financial situation worsening in the next year with only one in eight anticipating an improvement.

The details of the August survey suggest Irish consumers are now quite gloomy with Brexit fears significantly outweighing still generally positive current conditions.  While similar numbers report gains and losses in respect of their household finances in the past twelve months and there is a small positive balance in relation to the current buying climate, readings in these areas were also downgraded in August. These elements suggest a cautious approach to household spending rather than cutbacks is likely to continue until Brexit is resolved.