In a week in which there has been considerable confusion as to exactly what is happening in the Irish economy at present, new census data present a fairly clear and positive picture of the Irish economy. Today’s data show the population has increased somewhat faster than expected through the past five years as a result of a notably less negative trend in net migration than previously thought. In turn, this suggests the economy is set on an encouraging path.

Ireland’s population rose by 0.7% on average each year between 2011 and 2016. This is a stronger increase than we had expected and notably faster than the rate of about 0.3% implied by annual population estimates for 2011 to 2015. Over the 2011 to 2016 period, the average annual net outward migration from the country was 5.7k whereas previous estimates suggested an annual number of just over 20k. These revisions paint a demographic picture that seems entirely consistent with an Irish economy that is now in solid recovery mode after a traumatic downturn. Diagram 1 below emphasises the exceptionally flexible nature of the Irish economy when it comes to demographic developments. As the diagram shows, the importance of migration flows mean population trends lag trends in the jobs market, albeit in more moderate proportions (the diagram reflects estimated revised annual rates of population change on the basis of today’s census figures). 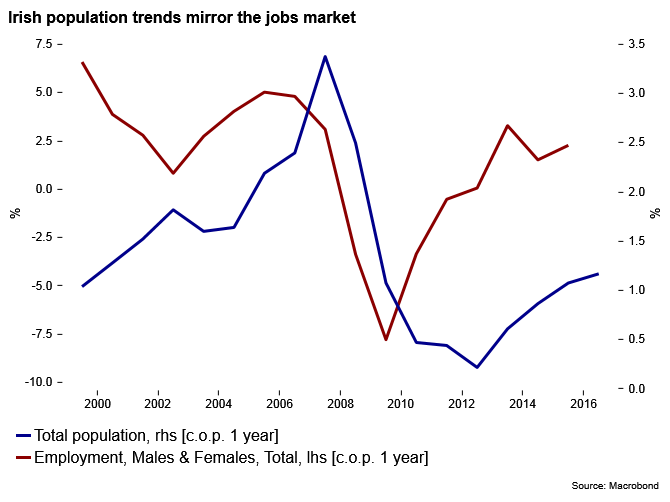 While today’s census data seem to confirm improving current conditions in the economy, a stronger demographic trajectory also suggests scope for a potentially faster pace of Irish economic growth in coming years than had been envisaged.  We tentatively estimate that the potential growth rate might now be around 4% rather than our previous figure of just over 3%. This revised figure abstracts from any implications of the notably larger capital stock revealed in Tuesday’s GDP data.  As we noted in our comment on those data, estimates of potential growth and important associated measures such as the structural budget balance and fiscal space need to be fundamentally re-assessed. However, today’s data again underscore the substantial growth capacity of the Irish economy.

Today’s data also emphasise the fundamental nature of the issues facing Ireland’s housing market and the extent to which perspectives on that market have changed since 2011. Faster than predicted population increases seen through the past five years, coupled with very limited new housing construction, has, according to today’s census data, produced a decline in the number of vacant housing units and an increase in the size of the average household.

In turn, these developments are entirely consistent with sustained increases in house prices in recent years and marked differences in the temperature of the housing market in different areas of the country as diagram 2 indicates. These trends  also suggest the significance of internal migration within Ireland in the wake of the downturn may have been underemphasised relative to the focus on migration from the country. 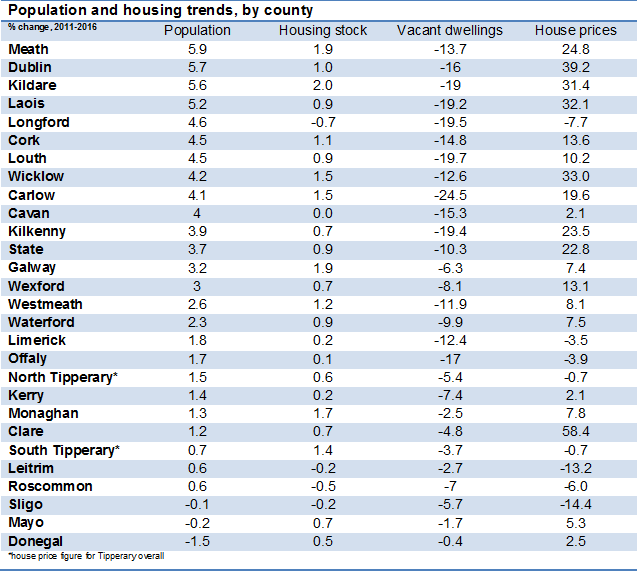 As diagram 2 indicates, those counties reporting above average population increases also tend to have seen above average increases in residential property prices between 2012 and 2016, although exceptions such as Longford and Clare emphasise the importance of local characteristics to the housing market and potential pitfalls in the price data. It should be emphasised that these estimates of price changes are derived from average values of property transactions from the National Property Price Register and, consequently don’t adjust for differences in property characteristics or the ‘thinness’ of transactions at the county level in recent years.

Today’s census data also emphasise that Ireland remains set on a notably different demographic path than most other EU countries. As diagram 3 below indicates, Ireland’s pace of population increase is notably faster than the EU average even though Ireland has experienced a net migration outflow through the past five years.  The ‘natural’ rate of increase reflects clearly different trends in both the birth rate and death rate reflecting a notably younger population profile and, as such appears altogether healthier than the EU average.  With today’s data suggesting the strong likelihood of a return to net inward migration into Ireland of late, Ireland’s population path looks notably more balanced than that of the EU as a whole.