Can The ECB Quell Global Inflation?

The ECB decided against cutting rates

Although there was some expectation that the European Central Bank could cut its key policy rates today, the decision to leave them unchanged was in line with the consensus view.  The only action the ECB took today was to announce that commercial banks could continue to get all the liquidity they demand at the ECB’s regular refinancing operation up to the end of 2012.  This is a welcome but not surprising development.

Probably of greater importance, ECB President, Marco Draghi, told the regular monthly press conference that the ECB had debated cutting rates today but ‘in the end’ had decided against doing so or a number of reasons. Significantly, Mr Draghi hinted that if upcoming data confirm recent signs of a renewed deterioration in economic conditions in the Euro area, the ECB ‘stands ready to act’.

Mr Draghi set out a range of reasons why the ECB didn’t cut rates today. His comments suggest that the decision, arrived at by consensus, was the result of a fairly lengthy and detailed discussion and ‘a few members, I would say not many, would have preferred a rate cut today’. While the arguments Mr Draghi gave for not cutting rates are quite diverse, many of the reasons seem to be tactical in nature and, as such, markets are likely to anticipate a rate cut at the next policy meeting of the Governing council on July 7th unless economic data in the interim are altogether more robust than of late (see Diagram 1 below) or the ECB is deeply unhappy with progress made by Governments in other policy areas.

One reason advanced by Mr Draghi for the decision not to change official rates today was that new ECB staff projections were virtually identical to those made in March (a time when the ECB seemed to be shifting towards a slightly more hawkish view of the world). In a narrow technical sense, the fact that the projections have not changed might tend to suggest that policy should also remain unchanged. However, Mr Draghi made it clear that the new projections shouldn’t be seen as a major obstacle to easier policy in the months ahead. First, he emphasised that since the cut-off date for the forecasts of May 24th the emerging evidence has pointed towards a notably weaker current trajectory for the Eurozone economy. Furthermore, the Governing Council has recognised a rapidly changing situation by acknowledging ‘increased downside risks to the economic outlook’. Finally, today’s press statement also says ‘the economic growth remains weak’ – a notably more downbeat description of the current situation at present than it previously used.

By and large, the macroeconomic arguments advanced in favour of not cutting rates today tend to point in a direction of a tactical postponement until the economic and political situation becomes a little clearer rather than a complete refusal to countenance lower rates.  With a further Greek election and yet another high profile EU summit to come later this month, the ECB likely felt it better to keep its powder dry and retain some bargaining power in circumstances where, as Mr Draghi emphasised a number of times today, it feels the key responsibilities for action now lie outside Frankfurt. When asked about the prospect of further long term liquidity support though another tranche of LTRO’s, Mr Draghi answered that ‘some of these problems in the Euro area have nothing to do with monetary policy’ and added that it wasn’t right that monetary policy ‘should have to fill other institutions lack of action’. This suggests the ECB may use the prospect of a further rate cut and perhaps other supportive actions as a bargaining chip to encourage more decisive action by European Governments in coming weeks.

The ECB clearly thinks more decisive action needs to be taken by others.  However, we also think some ECB officials may feel there are significant limitations as to what can be achieved by further monetary policy actions at this point in time. In response to a question on the possibility of rate cuts Mr Draghi noted that ‘price signals have relatively limited effects in the short term’. He subsequently clarified this point and hinted that further rate cuts might be expected by saying ‘we think its effective’ but added that the current context of liquidity constraints and tensions in financial markets needs to be taken into account. Mr Draghi went on to say this wasn’t a reason for cutting or not cutting rates today but meant there was a need to study carefully what impact ‘price changes’ (ie. rate cuts) would have in current circumstances.

It should be emphasised that in making these comments Mr Draghi wasn’t highlighting a preference for liquidity measures rather than further rate cuts. Indeed, on several occasions today, Mr Draghi seemed to downplay the prospect of a further 3 year LTRO by questioning whether additional LTROs would be effective in circumstances where he said risk indicators have eased somewhat.  He also noted there is plenty of liquidity in some areas and shortages in other areas. Perhaps significantly, today’s press statement no longer points to be ‘a stabilisation in financial conditions’ of late. Instead, it continues to point to the role previous LTRO’s played in avoiding ‘an abrupt and disorderly adjustment in the balance sheet of credit institutions’.  So, the ECB wants to emphasise that additional LTROs won’t lead to a rebound in lending.

In broad terms, we see today’s ECB press conference as a somewhat awkward holding operation. It is fairly clear that the threats to the health of the Eurozone economy have increased markedly of late.  However, the ECB still faces significant ‘event risk’ in the next month as well as a range of opinions within the Governing Council.  These relate to whether further supportive action should be taken, what form it might take and how successful it may be. In these circumstances, the decision to hold rates today while effectively signalling an easing bias as well as the announcement that the regular refinancing operations will continue to be at full allotment for the remainder of 2012 represent an inelegant compromise.

As Diagram 1 suggests, we think the evidence from recent survey and lending data is strongly pointing in a threatening direction in terms of the outlook for the Euro area economy. It is difficult to see circumstances in which this sort of evidence will not build further in the month ahead. This suggests the pressure on the ECB to cut its main policy rates in July will be very difficult to resist. In circumstances where the ECB feels European Governments are making progress to deliver a longer lasting solution, an easing in ECB policy rates next month may be accompanied by additional liquidity support measures as was the case in late 2011. 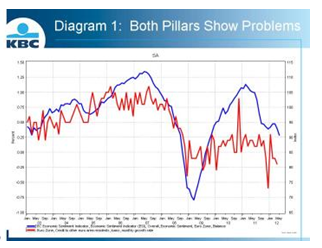 The expectation of such actions may cause markets to travel more hopefully for the next month or so. The key question in whether the ECB in concert with European Governments can deliver a sufficiently credible package of measures to significantly alter the worrisome trajectory of the Euro area economy that Diagram 1 depicts.