Can Recent Strength In Irish House Prices Be Sustained? 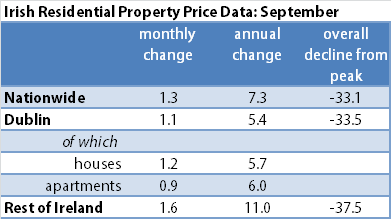 September saw further strong gains in Irish housing prices according to the latest CSO property price data released yesterday. Solid monthly increases in each of the past three months mean that the annual rate of residential property price inflation has picked up notably since June and is now running at the fastest pace nationwide (+7.3%) in fifteen months.

The trend in Irish housing prices of late is slightly stronger than we anticipated. While the outlook for the remainder of this year and into 2017 is clouded by increased uncertainty about both ‘macro’ conditions in the Irish economy as a whole and factors specific to the housing market, there appear to be several factors underpinning property prices at present.

Our best guess is that a gradual if possibly uneven easing in Irish house price inflation will become established through 2017. The scale of slowdown will be significantly influenced by the extent to which downside risks to the Irish economy posed by Brexit or marked changes in US economic and tax policies crystallise into notably weaker conditions than are now envisaged. However, with new housing supply improving but still constrained and a significant element of pent-up demand now emerging, factors specific to the Irish property market remain supportive of further if more modest increases in Irish property prices.

Probably the most notable feature of the recent trend in CSO property price data is the extent to which it has been felt across the country as a whole. Some sense of how broadly based the uptick in prices has been in recent months is given by diagram 2 which shows the trend in the CSO’s index of house price levels for various regions of the country. Admittedly, the pace of increase varies notably across regions at present but this graph emphasises that a wide reaching pick-up in prices has become established of late. 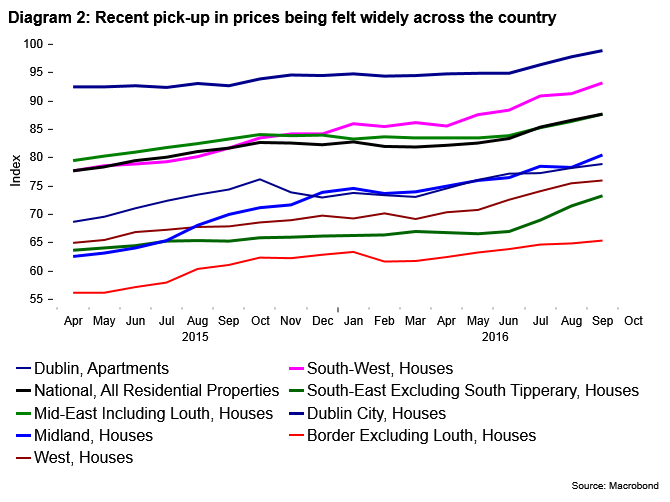 Diagram 3 below gives some sense of the increasing momentum in Irish property prices of late by comparing the recent trend as depicted by the three-month annualised rise with the more conventional measure of year over year increases for Dublin, the rest of Ireland and the country as a whole. This highlights the particular strength of price gains outside the capital through the summer months but also suggests a notable firming of prices in Dublin as well.

In circumstances, where many other domestic pointers towards Irish economic conditions, including retail sales and consumer sentiment, have shown a weaker trend of late, the stronger trend in house prices may seem slightly surprising. We think a wide range of factors may explain this divergence and the relative importance of each of these will probably determine whether property price inflation eases or accelerates in the year ahead.

First of all, it should be noted that the typical time lag between offers being made and home sales being completed and registered means that these numbers reflect purchase decisions made in the late spring and early summer, a period when economic confidence was strong and improving and Brexit seemed extremely unlikely. One would expect that a notably less certain economic outlook at present will have some cooling effect on price trends that will show up in house price data for the final months of 2016 and the beginning of 2017.

A second factor likely to contribute to a moderation in price growth in coming months is a normal seasonal pattern that tends to result in stronger prices during the spring/summer home-buying season. Diagram 3 shows a clear pick-up in prices also occurred through the summer months of 2015 and this suggests some element of recent strength could be temporary and reversed in coming months. That said, diagram 3 also shows that the recent firming was clearly stronger than a year earlier which suggests other factors may be at work of late. 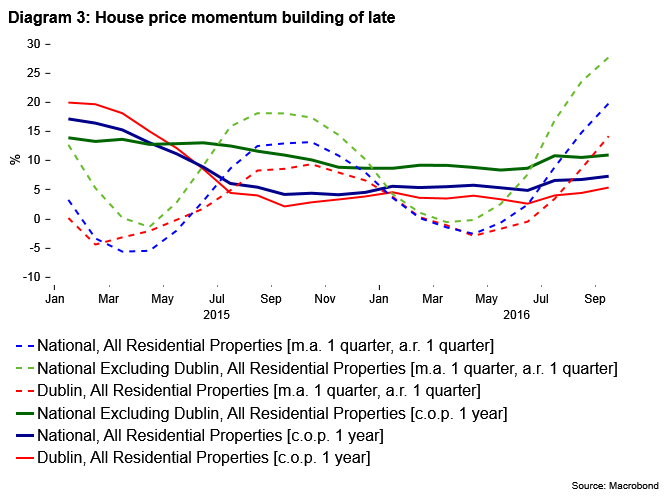 One important element influencing prices at present is the re-emergence of pent-up demand as the dearth of ‘normal’ purchasing activity through the past six or seven years translates into a bulge in buying intentions. A strong jobs market, renewed net inward migration and the continuing buoyancy of rents are offering increasing support to purchasing demand at present. As diagram 4 illustrates, the gap between new mortgage drawdowns, a barometer of incremental demand and new completions, a measure of additional supply, has been increasing of late in a manner that would underpin growth in property prices. 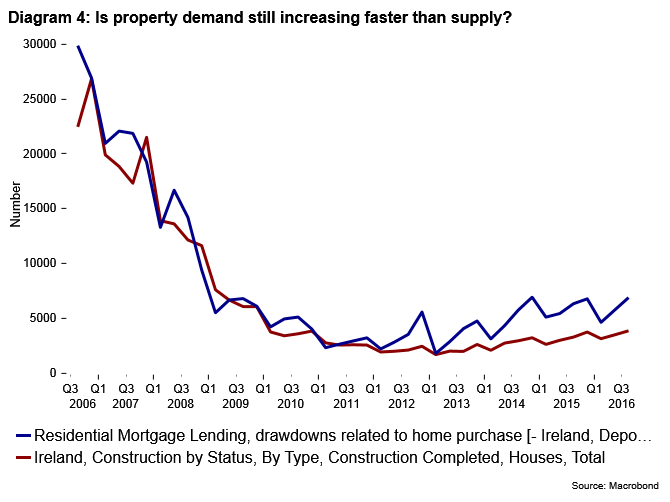 The recent trend in Irish property prices might also reflect the manner in which the market is adapting to a couple of important policy interventions. One possibility is that that the market might now have significantly adjusted to the ‘shock’ of the CBI lending limits which contributed to the sharp deceleration in property price inflation seen through the second half of 2015. Through the nearly two years since the introduction of lending constraints was first announced, prospective purchasers, affected by CBI rule changes, could have built up larger deposits, opted to purchase smaller properties or extended their search across a wider area. As a result, it may be that the initial impact of the Central Bank’s tightening of lending conditions is lessening.

It could also be that some anticipation of the likely impact of Government measures to assist homebuyers first mooted in May in the ‘Programme for a Partnership Government’, signalled in July’s  action plan on housing and set out in Budget 2017 might also have contributed to the firmer trend in house prices of late. The latest property price data would only reflect expectations in relation to the recently confirmed measures but asset prices typically move quickly to discount such interventions (as global financial markets reaction to what measures may or may not be adopted by the Trump presidency in the US shows). It seems likely that the formal announcement in Budget 2017 of a tax rebate of up to €20k for first-time buyers of new homes will provide some further support to house prices in coming months.

A final and important consideration in terms of the outlook for Irish housing prices is the extent to which current valuations are aligned with ‘fundamentals of the Irish economy. There is no perfect metric in this regard but some perspective is provided in one of the reports released by the EU Commission this week in the context of its analysis of macroeconomic imbalances in EU member states. The chart reproduced below (from the Commission’s Alert Mechanism Report 2017) suggests that on a range of traditional metrics, Irish house prices may still be somewhat undervalued.

The Commission study suggests this undervaluation would have been close to 15% at the end of 2015.  If the current pace of price increase is sustained to the end of this year, this would correct about half of the undervaluation estimated in the Commission report. In turn, this would suggest that, in the absence of notably adverse shocks to The Irish economy in 2017, Irish house prices could see further solid gains. 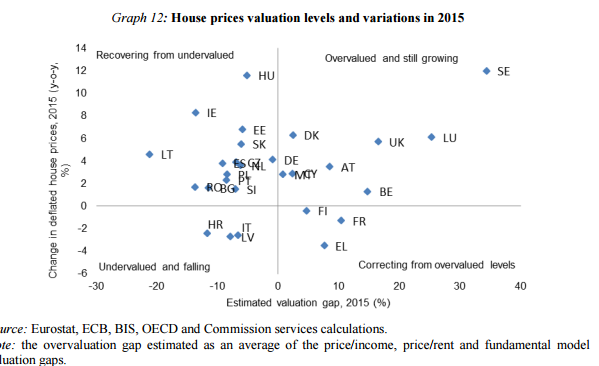