May house prices up 11.9%, the fastest increase in two years

Surge in Dublin prices the key driver of monthly acceleration

With supply still struggling but slightly up, main impetus to recent spike is from marked pick-up in demand

Irish house prices rose strongly again in May, leading to a further pick-up in the rate of property price inflation to a two year high of 11.9% in May from 10% in April (marginally revised down from the first estimate of 10.5%). This further pick-up in property price inflation was principally driven by the fastest monthly increase in Dublin prices since July 2014. Outside Dublin, there was a marginal easing in both the monthly and annual rate of increase.

Irish house price inflation at 11.9% is now running at more than twice the pace of a year ago (May 2016 +5.4%), with the current increase in Dublin (+11.2%) more than 3 times higher than a year ago (+3.4%). The bulk of this acceleration has come in the past 6 months as policy measures in the shape of the Governments ‘Help to Buy’ scheme and an easing of the Central Bank’s loan to value limits boosted demand relative to supply.

Our sense is that the key contribution of these initiatives has been to alter sentiment in relation to the outlook for the property market particularly in regard to prices. In that sense these measures are likely to have augmented and brought forward demand (an outturn previously signalled by our homebuyer sentiment survey here). Our sense is that this effect is substantial but that it is essentially once-off in nature and should eventually ‘wash’ through the market leading to an eventual easing in the pace of property price inflation.

While inadequate supply is the key feature of the Irish property market at present, filings data that accompany today’s release point to some modest pick-up in transactions in the first five months of 2017 with activity up 6% in Dublin and 1.3% elsewhere compared to the same period of 2016. This suggests that the main driver of the acceleration in property price inflation has been the increased buoyancy of demand which, although primarily a reflection of an improving economy, has been significantly boosted by the response of prospective purchasers to recent policy changes. Understandably, these effects have been most pronounced in Dublin where underlying demand is particularly strong.

Some sense of the scale of the recent pick-up in demand (and consequently some indication of the impact of policy changes) is suggested by the extent of the acceleration in the growth in mortgage approvals in late 2016 and early 2017. Between November 2016 and May 2017, the average annual increase in the number of approvals for house purchase was 44% (we have used loan approvals rather than drawdowns as the former represent a better measure of potential demand).

As the diagram below indicates, there are some tentative signs of a modest trend easing in the pace of mortgage approval growth of late that, if sustained, might be expected to lead to an eventual moderation in the pace of property price inflation. Also acting in the same direction should be the impact of a slower pace of increase in average loan size than in house prices.  As the diagram also indicates, the rate of increase in the average purchase loan value approved (+8.4% in May) has fallen behind the rate of property price inflation in the past three months. Again, this development would be consistent with a step-up in purchasing power in the wake of recent policy changes. 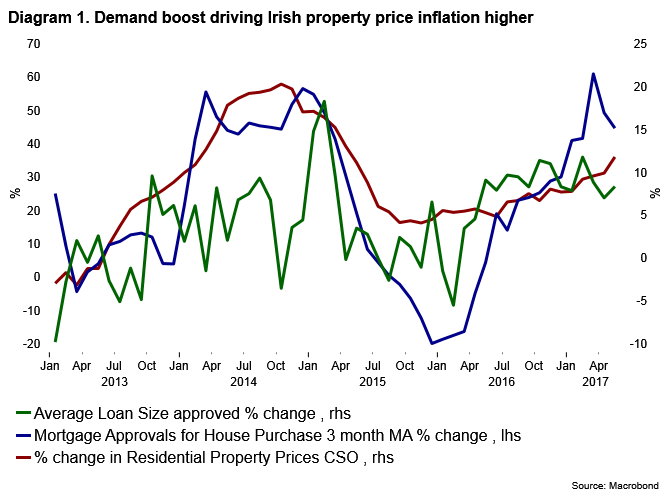 To the extent that no further policy initiatives are taken to boost demand, it might be expected that the rate of property price inflation would slow later in 2017. However, this is unlikely to be a smooth or speedy process. Moreover, if the ‘Help to Buy’ scheme were to be ended, this might trigger a short lived spike to beat the closing date.  Our sense is that 2018 should see a material easing in the pace of property price inflation as demand ‘normalises’ to a calmer pace of increase and supply improves further.