Consumer sentiment falls to lowest level in a year in December.

Budget impact leads to downgrade of outlook for household finances.

Drop in December may be overstated but it emphasises how fragile confidence is and cautions against excessive optimism on 2013.

Significant parallels with recent weakness in similar US data as consumers fret about Budget changes.

Irish consumer sentiment fell sharply in December. The KBC Bank Ireland/ESRI Consumer Sentiment Index fell to 49.8 from 63.8. While this was the largest one month point decline in the seventeen year history of the index, substantial falls have been seen towards end year in both 2010 and 2011 as diagram 1 shows. The drop in December brings the index back to its weakest level in a year. 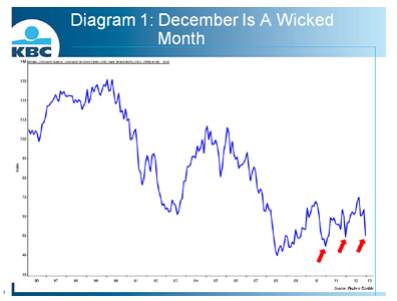 We think the scale of the decline in the sentiment index hugely exaggerates the change in the circumstances of the average Irish consumer of late. It likely reflects an outsized reaction to fears about the impact of Budget 2013 on spending power in the coming year as did similar weakness in each of the two previous years. However, it does emphasise two important points. First of all, consumer confidence, like the broader condition of the Irish economy, remains fragile. Second, the average Irish consumer continues to face significant pressure on their spending power and uncertainty about their future. In such circumstances, the likelihood is that domestic economic activity will see only a gradual and modest turnaround in the next year or two.

The sharp deterioration recorded in Irish consumer sentiment recorded in December is at odds with a marginal improvement in sentiment in the Euro area. However, it did coincide with notable declines in sentiment indicators in the US and UK as diagram 2 indicates. In the States, the consumer sentiment index compiled by the University of Michigan fell about 10 points to 72.9 (the drop was the fifth largest in the past thirty years). This sharp move was attributed to rising fears that Congress and the White House would fail to reach agreement on measures to prevent sharp increases in taxation and cutbacks in spending that would push the US economy over the much feared ‘fiscal cliff ’. In the UK, the GFK consumer confidence index fell an unusually large 7 points in December but this has to be seen in the context of a similarly large 8 point gain in November.

While the scale of deterioration in the Irish sentiment index was notably greater than those seen in the US and UK, these other December declines seem to reinforce the idea that consumers in many countries are ‘jumpy’ at present because of the degree of uncertainty about the future. The unexpectedly large fall in US sentiment following a relatively positive trend for most of the past six months underlines how vulnerable the mood of consumers can be in the face of ‘event risk’. In both the US and Ireland it appears that such fears crystallised in December as speculation reached fever pitch in regard to how much damage Budget changes might do to living standards in 2013. 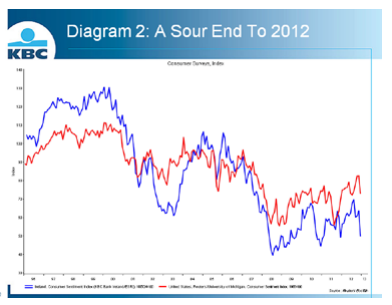 Developments in relation to consumer sentiment in the US and UK in December provide some context for the marked fall in Irish consumer sentiment last month and tend to suggest why a significant weakening in the mood of Irish consumers might have occurred. That said, we don’t think they explain the intensity of the fall seen in the Irish Consumer Sentiment Index. Our judgment is that the 14 point fall in the index represents an exaggerated movement that is partly explained by the particular nature of a sentiment index. In circumstances where a particular event is seen having a significant and broadly similar effect across most if not all households, it is almost inevitable that consumers will respond in a uniform manner. There is little doubt that most Irish consumers felt that Budget 2013 would make them worse off and this prompted an outsized fall in sentiment in December. As usual, the survey was taken in the first two weeks of December. Roughly 80% of responses were taken between the 3rd and 11th of the month (Budget 2013 was presented on December 6th). Throughout this period an intense focus on the range and scale of budget measures, their fairness and their economic and political repercussions dominated media headlines. Broadly similar drops in sentiment were seen in both 2010 and 2011 on similar concerns but it seems that media reports of the ‘harshest budget ever’ resonated strongly with Irish consumers.

The exceptional weakness of the December consumer sentiment reading appears very much at odds with a range of reports suggesting retailers enjoyed a buoyant Christmas period. This is explained partly by timing differences. As noted above, the consumer sentiment survey for December was centred on the week of the Budget and the survey usually reflects changes in confidence between the first two weeks of one month and the same period of the previous month. In contrast, retail reports tended to emphasise an improvement in spending in the second half of December while official November retail sales data were softish. However, these timing differences don’t adequately explain the extent of divergence between the mood of consumers as indicated by the sentiment report and the buoyancy in spending reported by retailers.

Our judgment is that two factors go some way towards reducing the seemingly large gap between the confidence index and reported retail performance. First of all, the sentiment survey was taken at a time when there was an intense focus on the scale and range of measures that would hurt spending power. As the month of December progressed, these fears may have eased somewhat. At the same time, consumers, aware that they were facing into a difficult 2013, may have decided to loosen the purse strings somewhat. In some cases, this may have been a last hurrah. In others, it may have been driven by significant price discounting by retailers before and after Christmas. On this interpretation, the downturn in consumer sentiment in December may exaggerate the degree of weakness likely to be seen in the coming year but recent positive retail sales reports may equally overstate the likely trajectory of Irish consumer spending during 2013.

The sharpest deterioration in sentiment was seen in relation to consumer assessments of how their household finances would develop in the coming year. The number expecting an improvement shrank from 13 per cent of those surveyed to just 6 per cent while the number that expect their personal finances to worsen surged from 49 percent to 65 percent. Consumers were also notably more pessimistic about the trend in their financial situation in the past twelve months in spite of a sharp fall in inflation reported during the survey period. It may be that consumers were more focussed on what is now a longstanding decline in living standards. In these circumstances, it is scarcely surprising that consumers also downgraded their assessment of the buying climate which tumbled to its weakest level since November 2008.

It should be emphasised that the particular weakness of the December consumer sentiment survey was largely driven by concerns in relation to household finances rather than more general worries about the ‘macro’ environment. While there was a significant downgrading of consumer assessments of the outlook for the Irish economy, there was a marginal improvement in prospects for the jobs market, presumably helped by a range of job announcements and a further drop in unemployment during the survey period. So, the plunge in sentiment seems to be largely driven by Budget-specific concerns. It should be noted that the December 2011 sentiment index also reported a fairly large decline that seemed to reflect Budget worries and was gradually reversed over the following months. However, while recent December readings have been relatively weak, this doesn’t seem to be a pure seasonal effect. We seasonally adjusted the raw data presented in this report and found that the monthly decline in seasonally adjusted terms in December 2012 was as large as that in unadjusted numbers. The absence of a clear seasonal factor in December probably reflects the dramatic contrast between the giveaway Budgets of the boom years and the hair-shirt Budgets of more recent times.

A definitive judgment on the significance of the sharp drop in Irish consumer sentiment in December is only likely to be possible when we see data both for sentiment and spending for the early part of 2013. Our tentative assessment at this point is that the December report significantly exaggerates the degree of deterioration in the mood of Irish consumers of late. However, as in the case with corresponding US data, we think the December data also emphasises the fragility of confidence at present and the degree of pressures on household spending power. These results caution against excessively optimistic expectations in regard to the trajectory of Irish consumer spending in 2013 that might be based simply on an extrapolation of recent upbeat retail reports.

The scale of movement seen in the sentiment index in December also highlights the importance of ‘event risk’ in what remains an uncertain environment. It could be argued that this emphasises the importance of ensuring there is good news in relation to measures to ease the burden of Ireland’s banking related debt in coming months. The particular weakness of sentiment around end year may also argue for a somewhat different approach to that used at present to signal and announce Budget day changes.