The fact that Budget day commands such widespread attention in Ireland reflects a longstanding tendency for pronouncements that emphasise shock rather than stability. While most of Budget ‘22’s main parameters were flagged and finalised well in advance, today’s delivery warranted more than usual attention. This is because there is now considerable uncertainty as to what role fiscal policy could and should play in an Irish economy that is likely to look altogether different in three to five years’ time to the pre-pandemic baseline used to assess the appropriateness or otherwise of fiscal metrics.

Although it hasn’t fully penetrated discussions around Irish budget policy, a major re-assessment of the role of fiscal policy has been taking place globally in recent years. In part, this has been driven by the limitations on Central Bank policy in a world of low interest rates.

However,the pandemic also highlighted the difficulties that monetary policy has in addressing shocks or structural changes that affect different parts of economies in very different ways.In this new order, fiscal policy is required to play a much broader role than simply ensuring the books are balanced.

If Irish fiscal policy is to play this role properly, it must

be responsible in the sense of being grounded in terms of the scale and shape of the measures undertaken and the arithmetic underpinning them,

be relevant in terms of focussing on the key challenges facing the economy and society, such as infrastructure deficits and decarbonisation, and, particularly in current circumstances,

be reasonable in a variety of ways, such as striking a balance between extending support for sectors still suffering from pandemic effects and likely to require further assistance or providing significant but not blanket offset to a temporary energy-centred spike in living costs or the more permanent impacts of  addressing climate change.

The scope for Irish fiscal policy to underpin a solid, more stable and sustainable path for the Irish economy in coming years is notably enhanced by the underlying strength of the public finances that in turn, reflects the growth potential of the Irish economy.

This potential and the related capacity to deliver improved economic and social outcomes are at least implicit messages in Budget ’22. What isn’t yet clear is the precise combination of feasible public spending and tax initiatives that will maximise the likelihood of such outcomes.

Although outsized GDP growth is partly responsible for this markedly better than predicted outturn, a comparison of the deficit in cash terms for 2021 of €20.5 billion envisaged a year ago with the € 13.3 billion figure contained in today’s statement underlines the extent to which the public finances have outperformed of late.

These better than expected fiscal out-turns in both 2020 and 2021 continue an established trend that reflects both the underlying dynamism of the Irish economy, an understandable conservatism in fiscal forecasts and technical difficulties in assessing tax revenue elasticities as well as being informed by a strong sense that risks, both around out-turns and their consequences, tend to be heavily skewed in the direction of poorer outcomes.

In these circumstances, it could be argued that there was financial leeway for a significantly larger fiscal package than the €4.7 billion formally announced in today’s Irish Budget for 2022. Very crudely, we estimate additional measures amounting to about €1-1.5 billion could have been included without materially altering the path for the public finances. 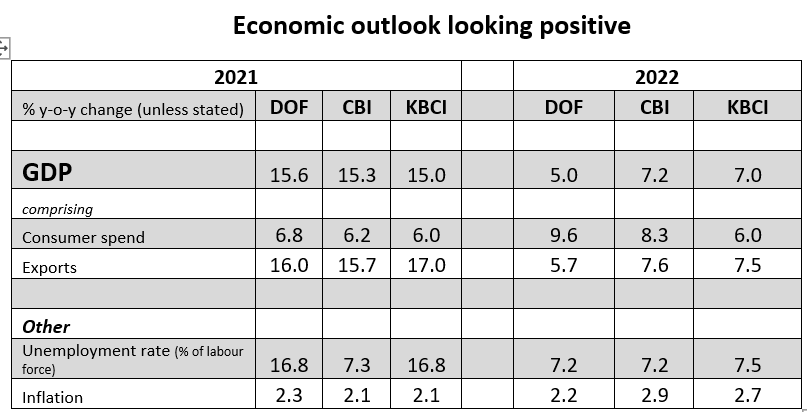 It should also be noted that the Dept of Finance envisages that Ireland’s public finances will be balanced within three years and will return to fiscal surplus within four years. Moreover, it suggests that the Debt to GDP ratio can fall below 50%. This would create a significant increase in ‘fiscal space’. Exactly how much remains to be seen in what is a very fluid situation in terms of fiscal rules or norms.

One way to arrive at a broad sense of the amounts that could be permitted would be to look at the limits envisaged in the existing domestic framework set out in the Ireland’s Fiscal Responsibility Act 2012. The act states that 'If the ratio of general government debt to gross domestic product at market prices is significantly below 60 per cent, and risks in terms of long-term sustainability of public finances are low, the lower limit of the medium-term budgetary objective shall be an annual structural balance of the general government of minus 1 per cent of gross domestic product at market prices'.

This may represent a far more restrictive requirement than a widely anticipated alteration of EU fiscal rules could allow but this would still imply scope for about €2 billion or more in additional fiscal support measures in coming years than is envisaged in the Dept of Finance projections out to 2025.

We think that debt and/or deficit rules are a less appropriate basis for fiscal rules than proposed measures linking public spending growth to the Irish economy’s potential growth rate. As ‘core’ spending is best defined in terms of day-to day outlays, this allows scope for larger increases in capacity enhancing infrastructure spend. In turn, this would imply that increased fiscal space be directed to capital spending.

‘Til debt us do part?

Today’s Budget speech notes that  ‘we need to repair our public finances, and put them back on a sustainable footing.’ The reality is that Ireland’s public finances may be in need of re-focussing and a return to normal growth but, as the diagram above clearly illustrates, they are not in need of urgent repair in the manner that was required after the financial crisis of just over a decade ago.  While public debt in the region of €240 billion may seem threatening, this  figure is not a fixed-term mortgage hanging over current or future generations.

The Irish public debt that was built up in the wake of the oil crisis and policy errors in the 1970’s and 1980’s is not now being repaid by current taxpayers. In the same way, public debt built up over centuries has not been paid down in most advanced economies. Instead, the present burden of borrowing by the Irish State, as is the case globally at present, is being borne primarily by  the current generation of investors through exceptionally low borrowing costs. In these circumstances, the critical issue is not the stock of debt outstanding, it is the uses to which any borrowing is put.>

Although interest rates seem set to trend higher in coming years, the pace of increase is unlikely to markedly pressure the Irish budgetary arithmetic. Instead, as has been the case in the past, if debt-related pressures emerge in the future, they will most likely reflect a failure of policy to underpin solid and sustainable economic growth. (in the commonly used technical terminology of debt dynamics, the risks in relation to Irish public debt are many times more likely to reflect a shortfall in future growth (g) than a surge in interest rates (r)).

We feel Budget ’22 might have added a little more support to the Irish economy. Contrary to a widely held view, if measures are carefully calibrated we don’t think this would threaten an inflationary spiral. In the context of a strongly growing Irish economy, it is important to emphasise that

a)    wide differences in the current cyclical position of firms and households make it meaningless to talk about ‘overheating’ as though all sectors are at capacity limits when significant areas require material further assistance to emerge sustainably from pandemic effects,

b)   recent academic research tends to commend the idea of running economies ‘hot’ to improve the re-balancing process,

c)   carefully calibrated fiscal measures should be capable of enhancing supply capacity rather than merely boosting demand, and

d)fiscal sustainability has important political and social dimensions that, if not acknowledged, will at times overwhelm technical economic considerations and produce very damaging outcomes. Our sense is that choosing the right fiscal measures will be at least as important as the dosage of fiscal medicine to ensure the health of the Irish economy in coming years.

In relation to specific measures in Budget ’22, we feel the scale and spread of adjustments to Welfare rates and tax bands represent a reasonable attempt to partly offset the impact of higher living costs. While it is entirely appropriate to cushion incomes against what should prove to be a large but not lasting acceleration in inflation, the reality is that fiscal policy cannot be expected to fully offset such shocks.

In the same manner, the strong signal sent by continuing to increase carbon taxes points towards the urgency of continuing on a path that will restrain and reduce Ireland’s carbon footprint.

Budget 2022 should underpin widely held expectations of sustained and solid Irish economic growth in the coming year. As the table below illustrates, KBC Bank is in broad agreement with the Dept of Finance and the Central Bank of Ireland in terms of the outlook for Irish economic growth through 2021 and 2022. However, we think that consumer spending could fall short of some expectations as higher inflation will eat into spending power and, with the ending of health-related restrictions, we think that most pent-up demand should be satiated by the end of this year.

Finally, it is worth noting in the context of overheating concerns that there is a strong consensus that the unemployment rate for 2022 is expected to be some 2 percentage points above its pre-pandemic level. Even allowing for a solid intra-year trend in jobs growth, strong demographics would imply a shortfall in employment of up to 50k next year. 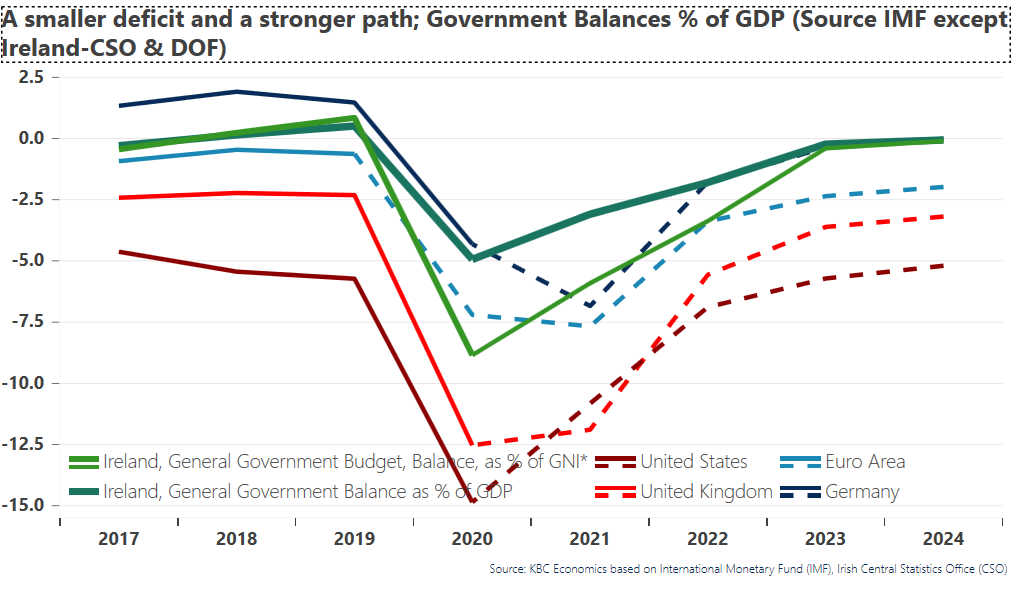 A promising fiscal step but what path will we follow?

While we feel that the carefully pre-signalled €4.7 billion fiscal package (€4.2billion of spending and €500 million of tax measures) whose details were announced today could have been modestly higher, we feel it is consistent with a shift in the focus of fiscal policy to an increased role in delivering improved economic stability.

However, other interpretations of the fiscal stance in Budget ’22 are equally plausible. The key question now is whether serious discussion shifts from a largely sterile debate in relation to the decimal points around the fiscal balance to a more difficult assessment of how precisely fiscal policy might best underpin the growth potential of the Irish economy.