Budget 2021 measures are necessary but are they sufficient?

Fiscal stance should assist in solid but not spectacular rebound

Use of unallocated Recovery fund may hold key to 2021 prospects

In the past, substantial budget deficits were central to large and lasting problems for the Irish economy. In present circumstances, large budget deficits in 2020 and 2021 are central to efforts to put the Irish economy back on a sustainable and positive path. The exceptional difficulties posed by the pandemic and Brexit mean we must assess Budget ’21 through a very different lens than would normally be the case.

The first and, hopefully, obvious consideration is the need for economic policy measures to support an Irish economy experiencing a severe downturn. Although most forecasts now envisage only a modest drop in GDP in 2020 (and we continue to see some possibility that GDP growth could even be marginally positive), the evidence of a large drop in employment both in comparison to other countries and relative to 2008/09 argues forcefully for substantial policy action to limit potentially permanent economic damage. The uneven nature of the hit to jobs entailing much greater recent losses among younger and lower paid workers who may be more vulnerable to a lasting ‘scarring’ of employment prospects urges the importance of policy actions on distributional as well as cyclical grounds. 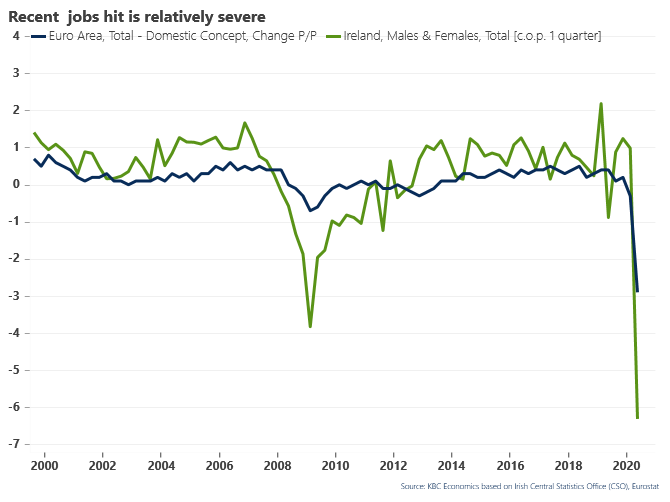 Budget 2021 continues a process initiated in March by the Pandemic Unemployment Payment and Temporary Wage Support Schemes and further developed in the July stimulus package in providing substantial and vital support to the Irish economy. It should be emphasised that significant as the amounts involved might be, these actions cushion rather than completely offset the impact of the Coronavirus on the Irish economy.

The Dept of Finance expect that modified domestic demand, a widely used summary measure of domestic economic conditions, will still be some €20bn (or roughly 10%) lower in 2021 than could have been envisaged before the pandemic even after aggressive fiscal actions in 2020 and 2020 are taken into account.

While Budget 2021 was stated to be ‘the largest and most ambitious  budget in the history of our State’ , the reality is that in terms of the level of government spending, the Budget package largely entails rolling over the scale of support already taken into 2021. Whereas Budget speeches focussed on a €17.4bn step-up in public spending relative to pre-Covid plans, in reality, non-interest spending will be up just €0.7bn (+0.9%) between 2020 and 2021.

As the 2021 public spending figure encompasses  a €2.1bn Covid contingency and a €3.4bn Recovery Fund ‘to address specific economic needs as they arise’, the overall spending plan for 2021 could imply a sharp reduction in public spending or the allocation of these funds into any possible number of spending programmes.

Given the scale of uncertainty about COVID-19, the broader but related health of the Irish economy and the additional threat of a disorderly Brexit, it makes perfect sense to hold some fiscal firepower in reserve. It might also be suggested that by centring future measures on a recovery fund, flexibility is enhanced and the risk of a permanent step-up in spending might be reduced. However, it could still be argued that the overall spending envelope for 2021 could have been stretched a little further to support a fast and fair economic recovery.

While a spending ‘reserve’ makes up some €5.5bn of the €17.4bn cited increase in public spending,  funding for specific measures to counter the coronavirus account for a further €6.4bn and day to day public spending measures amount to an additional €3.8bn, which, in light of the scale of changes in economic conditions in the interim, represents a conservative 6% rise on the Budget 2020 (pre-Covid) spending estimate for 2020.

Voted capital spending  is expected to be just € 0.275bn or 2.8% higher in 2021 than in 2020. In circumstances where short term considerations would signal significant scope to activate underutilised resources and longer term concerns would emphasise the need to add significant capacity in problem areas including health and housing as well as potential in green and digital fields, this scale of increase in capital spending may strike some as not sufficiently ambitious.

An inclination to err on the side of conservatism may owe much to the painful and recent experience of the financial crisis which is likely still exerting a significant and possibly excessive influence on domestic policymaking at present. The Minister for Finance’s speech is littered with phrases such as ‘What is crucial is making sure that any deficit remains a manageable deficit’ and ‘There are limits to the overall levels of debt that are prudent to take on’.

In one respect, these comments merely reflect the fact that Ireland’s borrowing capacity is bounded in scale and time but neither constraint is immediately relevant and other drivers may be more pressing. In this context, the following extracts from a speech given yesterday (12/10) by Isabel Schnabel, the German member of the ECB’s executive board point in a somewhat different direction;  ‘Fiscal expansion is then indispensable in order to sustain demand and mitigate the long-term costs of the crisis….Looking forward, governments will at some point need to make a credible commitment to regain fiscal space. But this should happen only once the economy has returned to a sustainable growth path.

While Mr Donohoe suggested that the deficit of 6.2% of GDP envisaged for 2020 ‘is a huge figure by Irish standards’, the reality is that it is markedly lower than the ECB’s projected figure of 9% for the Euro area average notwithstanding a larger than average initial hit to employment here. Moreover, a comparison of the Dept of Finance’s post budget projections with the latest IMF forecasts  (released today) for some of our key trading partners show the emerging increase in the public debt to GDP ratio is notably more contained in Ireland than in many other countries. 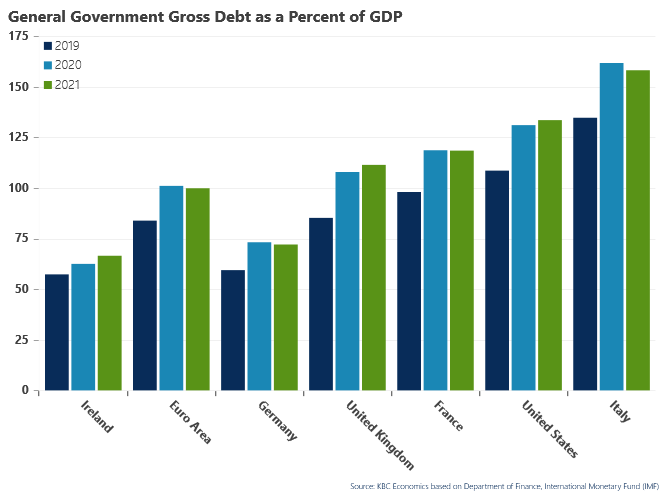 As a box in the Dept of Finance’s  macroeconomic and fiscal outlook paper in the Budget 2021 documents notes, the  near term rise in Ireland’s debt ratio is expected to reverse markedly in coming years because Ireland’s economic growth rate should materially exceed the cost of funding it’s debt. Both the current negative cost of government borrowing and the imperative to ensure a broadly shared economic recovery emphasise the case for an ambitiously supportive fiscal policy.

Economic outlook improving but constraints on consumer spending may persist

In an environment as uncertain as that now prevailing, there is little merit in comparing or contrasting economic projections. In the main, KBC’s current forecasts broadly accord with the post-Budget estimates prepared by the Dept of Finance although our central scenario for 2021 is based on a technical assumption of a narrow trade deal between the EU and UK and, consequently, sees GDP growth at 3%, about 1.3ppt higher and unemployment averaging 9% about 1.3ppt lower than the Department. At the margin, the details suggest expectations of a somewhat more subdued trend in consumer spending next year on the part of KBC economics (+4%) than the Department envisages (+7%).

Budget 2021 is dominated by ‘macro’ considerations largely relating to the exceptional interaction between health and economic drivers and this was rightly the focus of the measures announced today. However, the absence of any increase in spending power at the individual level (barring changes in employment circumstances) in an environment where uncertainty may remain elevated could act as a key constraining factor on the extent of any expected improvement in consumer sentiment and spending. In the same vein, there is some risk that, in a variety of ways, persistent constraints on activities classed as ‘social consumption’ could weigh on social cohesion.

For this reason, we think there is some risk that Budget 2021 may have erred at least marginally on the side of traditional dictates of fiscal prudence rather than on the side of inclusive progress. However, the significant resources available but not allocated in the form of the €3.4bn recovery fund could decisively alter that balance.