Budget 2019 was framed against a backdrop of conflicting influences and competing demands:

Having suggested the global economy was at a ‘sweet spot’ at the beginning of the year, the IMF is now focussed on ‘challenges to growth’.  As diagram 1 indicates the IMF has downgraded its global growth forecasts only modestly for 2018 and 2019 but this is the first downgrade for two years and suggests the year ahead could be quite testing. 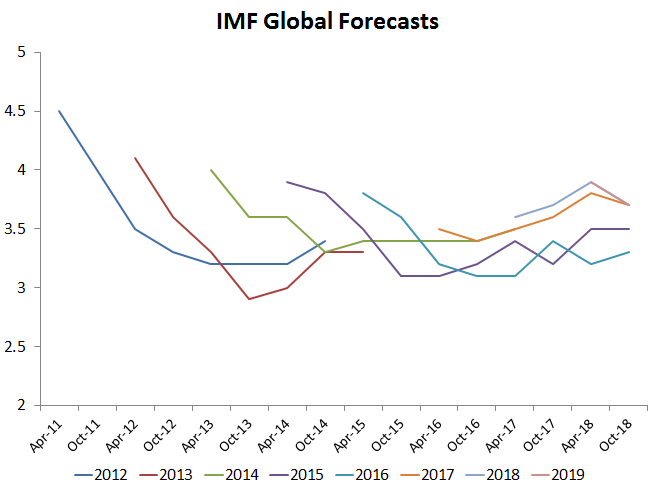 Event risk is plentiful whether it be related to a range of specific developments such as trade wars, difficulties in emerging markets, risks around a hard Brexit and the thrust of economic policy in Italy or more general issues such as rising interest rates and oil prices.

For all these reasons (and others described below), earlier domestic calls for an aggressive tightening of Irish fiscal policy in Budget 2019 have faded of late with most economic advice now cautioning against undue largesse. Our consistent view has been that the nature of the Irish public finances means that focussing solely on whether the budget is in deficit or surplus is unlikely to give any strong sense of whether fiscal policy (or the broader Irish economy) is on a sustainable path.

Does Budget 2019 improve the fiscal outlook?

As diagram 2 indicates, Budget 2019 envisages a positon of broad balance in the public finances in both 2018 and 2019 and, thereafter, predicts a steady further improvement to the point where on the Department of Finance’s figures a significant surplus of 1.4% of GDP (2.4% of GNI* on our estimates in diagram 2) is achieved by 2023. These estimates appear to imply a return towards the scale of surplus seen in the pre-crisis years. 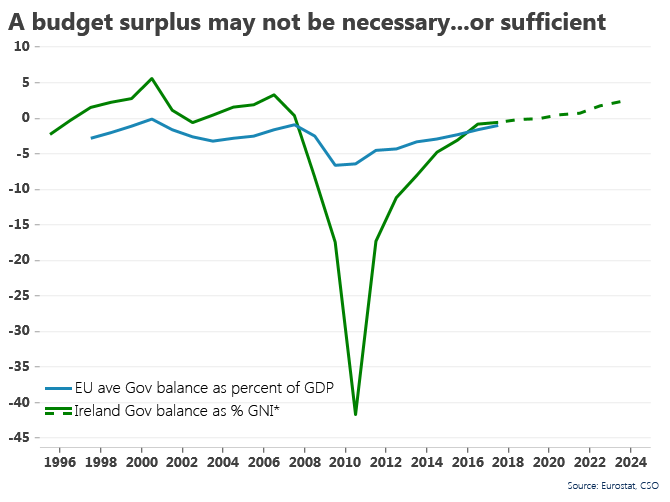 The key question is whether the surplus era now in prospect is likely to prove as fragile as its predecessor. One reason for an element of optimism in this regard is that the substantial adjustment between 2009 and 2014 was based on measures setting spending and taxes on more sustainable trajectories.

As we take the view that in current circumstances the achievement of a surplus is unlikely to be either a necessary or sufficient condition for Irish fiscal stability, the critical issue is whether Budget 2019 measures help or hinder to keep public spending and taxation on a sustainable path.

Spending on a strong upward trajectory

The Minister for Finance’s indication in today’s Budget speech that ‘the 20 per cent increase in current expenditure between 2014 and 2019 is significantly lower than the 57 per cent increase in the period 2004 to 2009, a comparable point in the economic cycle’ is hardly an auspicious comparison given the problems that followed that earlier spending spree.

The Minister announced a limited 4% increase in current spending in 2019 and, as diagram 3 below implies, the projected increases out to 2023 set out in today’s Budget documents envisages a relatively modest pace of spending growth in coming years. However, the reality is that spending growth at present is set on a markedly stronger trajectory than was envisaged on Budget day a year ago. The final outturn for voted current expenditure in 2018 is set to be some €2.945 billion higher than the 2017 outturn whereas Budget 2018 projected an increase of €1.64 billion.

Accordingly, public spending is now seen being €2.3 billion higher than previously projected in each year out to 2021 and of course, there is always the strong possibility of further over-runs in areas such as health.  Budget 2019 envisages public spending on health will increase to €17 billion in 2019 from €14.8 billion in 2017 but sees spending in this area only edging up to €17.4 billion by 2021.

Aside from this the possibility of additional pay increases for public servants as well as more modest perennials such as the Christmas bonus for welfare recipients implies risks remain skewed to the upside for current public spending. The broad thrust of Budget 2019 does little to curb such tendencies. 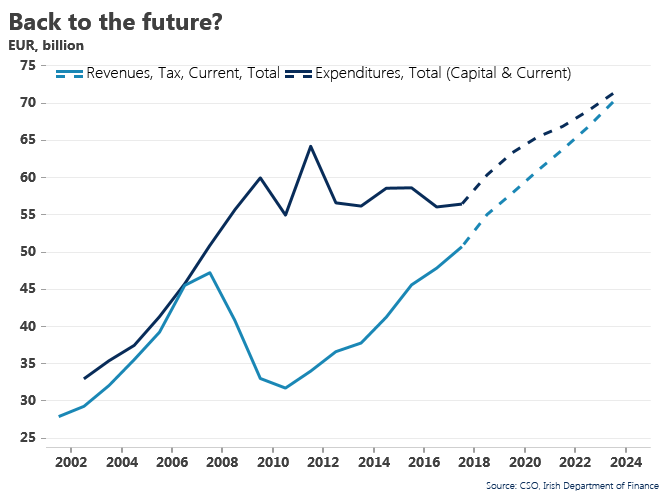 Budget 2019 also envisages a significant increase in public spending on housing. An increase of €470 million in this area brings the total spend to some €2.3 billion in 2019. While the minister envisages the delivery of 10,000 social homes in 2019, much of these will come through acquisition and leasing rather than new builds.

The allocation of an extra €121 million to the Housing Assistance Programme to fund an additional 16,760 tenancies is an acknowledgement that pressures in this area are unlikely to ease quickly. However, it should also be noted that some tentative signs of progress are being seen in the housing market. As diagram 4 illustrates, a marked increase in construction is staring to exert some downward pressure on house price inflation of late. Significantly, Budget 2019 avoided the introduction of a number of mooted measures that at very least would have complicated the process of moving towards balance in the Irish housing market. 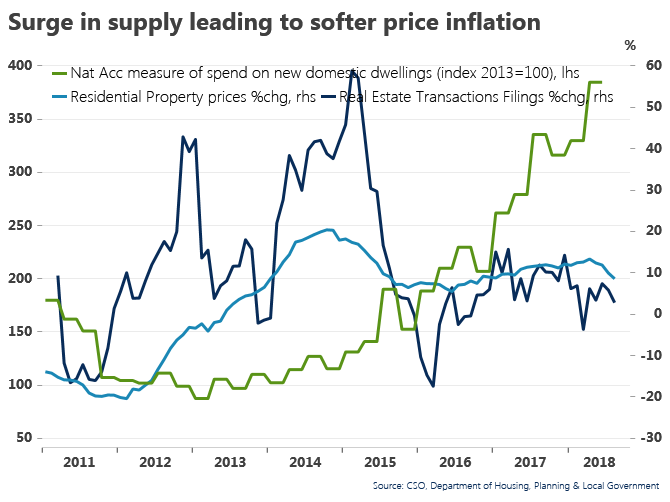 The primary focus of Budget 2019 was on spending rather than taxes. Significantly, expectations for tax revenues in coming years are slightly larger than would be expected from a consideration of the historic relation between growth in taxes and growth in GDP. This could be a source of difficulty in the future but for the moment, it remains a tentative source of risk.

In spite of a focus on spending, there was quite a range of revenue measures introduced. Tax ‘cuts’ centred on a slightly smaller than expected easing in income tax totalling some € 356 million in a full year were more than offset by revenue raising measures that totalled some €823 million(including compliance measures). For 2018, the net result of tax cuts and revenue raising measures is a not insignificant €350 million increase in revenue.

The ‘cut’ in income taxes in Budget 2019 is very modest at €356 million against our estimate that indexation of income taxes in line with wage increases would cost in the region of €500 million. The partial offset was that a similar amount of money wasn’t being taken from income taxpayers’ other pocket as the only one of the ‘old reliables’ hit in Budget 2019 was cigarettes.

With no increase in taxes on fuel or drink, the overall impact on Budget 2019 on Irish inflation should be modest but there will likely be some boost from the decision to end the ‘temporary’ cut in VAT on the hospitality sector and hairdressing.

Our sense is that the decision not to implement a widely predicted increase in taxes on fuel partly reflects Brexit considerations and a desire not to very visibly increase the domestic cost base. It likely also owes something to the significant upward pressure already being seen on fuel costs due to sharply higher global energy prices through the past year (oil prices were $55.75 per barrel twelve months compared to $84 today).

Reflecting these influences, we see Irish inflation picking up to 1.7% next year, a slightly faster increase than the Dept of Finance envisages.   Our sense is that the limited income tax concessions in Budget 2019 will increase pay demands and dampen spending to varying degrees across different categories of consumers in the coming year.

In broad terms, we don’t see Budget 2019 measures markedly altering the current trajectory of the Irish economy. Our forecasts are broadly similar to those of the Department of Finance but we see GDP growth slightly weaker than the Department in 2018 (+ 7% against 7.5%) and materially (but not dramatically) weaker in 2019 (3.5% against 4.2%).

In part, this is due to our sense of a more cautious consumer. We see household spending increasing by 2.5 % next year compared to The Department’s 3% forecast but  more significantly it stems from our expectation that  export growth will be more subdued if still solid in 2019 (+4.5% against +5.6%) in more challenging conditions globally.

As the near term outlook for the public finances is favourable, extra money is being injected into areas with a notable domestic footprint such as health and housing and costs are not being broadly increased, Budget 2019 could be said to offer some protection against a hard Brexit although it would be impossible to fully insulate the Irish economy against such a development.

By focussing additional resources on Public spending and drawing revenues from essentially once-off sources, there must be some risk that Budget 2019 doesn’t improve the prospects for longer term stability in the public finances but the decision to prioritise spending and limit tax ‘cuts’ at least points to some willingness to make tough choices rather than attempt to please everyone. Whether Budget 2019 pleases enough people could decide if a near term election is called and what shape and shade of government takes.