Budget 2018 is notable for the expected attainment of a broad balance in Ireland’s public finances. The Government expects to achieve a deficit equivalent to 0.5% of GDP in Ireland’s structural budget balance, the formal measure used to measure accordance with EU fiscal rules. Further modest improvements are envisaged in subsequent years. As diagram 1 below indicates, Budget 2018 represents the continuation of strong and sustained progress in restoring order to Ireland’s public finances. 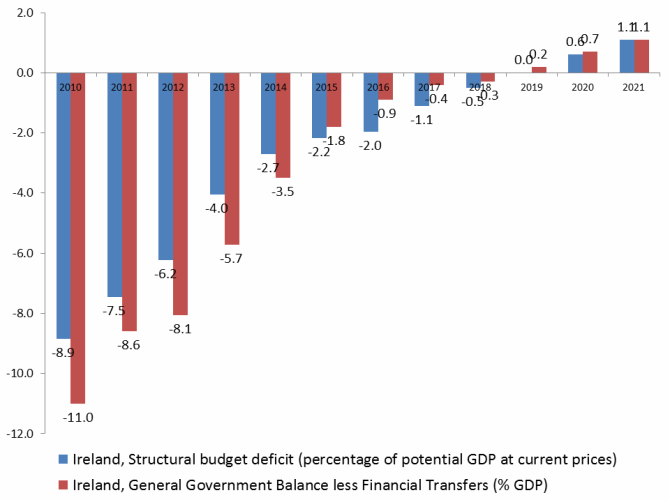 The Irish economy has performed notably better than expected in 2017 reflecting (i) a strengthening global economy marked by a particularly robust trend in the Euro area economy and much healthier than feared developments in the UK and US, (ii) significantly less disruption at the macro level to the Irish economy from ‘Brexit’, and (iii) stronger and more broadly based momentum in Irish domestic activity and employment as fears eased, positive wealth effects were felt and modest gains in spending power took hold.

As diagram 2 indicates, our assessment of the current health of the Irish economy is broadly similar to that of the Department of Finance (DOF). The DOF has marginally downgraded its GDP projection for 2018 from 3.7% in the spring to 3.5% but this shouldn’t be seen as a material change in view. At the margin, we take a more positive view of consumer spending than the DOF. We are somewhat surprised that in light of a projected 2.3% rise in employment and a 3.1% rise in wages that the DOF only envisages consumer spending growing by 2.3% in 2018. We expect increased confidence and pent-up demand for durables to support a solid but not runaway 3% increase both this year and next.

While the Department of Finance hase marginally reduced their growth forecast for 2018, it has fractionally upgraded its projections for each of the years from 2019 to 2021. More importantly, it has have also raised its estimates of Ireland’s potential growth rate to a somewhat greater extent-by almost 0.5% per annum. This helps avoid any marked build-up in ‘overheating’ pressures in coming years. Even in the period 2019 to 2021, inflation remains below 2% while unemployment stabilises at 5.5%. 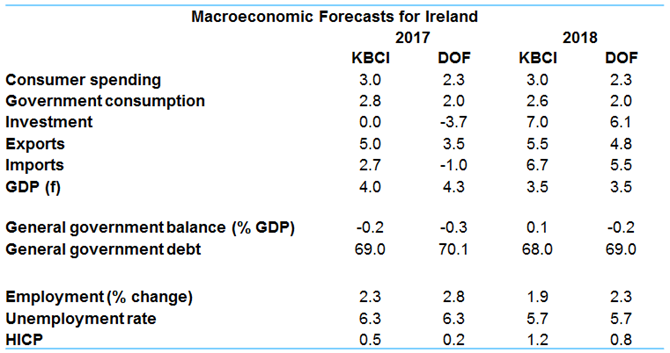 This stronger growth potential of the Irish economy in coming years also has the effect of improving Ireland’s structural (or cyclically adjusted) budget balance and increases the amount of fiscal space available for policy initiatives in the period 2019-2021. Perhaps understandably, the DOF hasn’t highlighted this increased latitude in the budget documents.

The impact of Budget 2018 on the Irish economy

There was little expectation that Budget 2018 would deliver any major stimulus to a healthy Irish economy.  The Irish economy is doing a good deal better than expected in 2017 and the recovery has begun to spread more widely across regions and households. Limited leeway for manoeuvre was carefully signalled and broadly accepted. So, there was no public clamour for major initiatives or ‘payback’. In broad terms, the Budget lived down to these expectations. There were small if widely spread increments to the spending power of most households through changes to direct taxes and welfare payments.

We estimate that at the aggregate level of the Irish economy  the net injection through discretionary changes to public spending and taxes is probably as little as 0.1% of GDP. This would mark the smallest discretionary adjustment since Budget 2003.  The question then arises whether this signals a new path to increased stability and ‘boring’ budgets or, as was the case fifteen years ago, a pause before a return to a more activist and ultimately damaging fiscal course.

What does Budget 2018 suggest about future budgets?

The Budget documents show the minister announced additional public spending measures amounting to €1.1billion. Just over 80% of this increase related to current spending.  As a result, day to day spending is set to increase by 3.4% in 2018, fractionally below the projected 3.5% growth rate for GDP. In circumstances where expectations for spending were low and economic growth is strong, this equivalence is somewhat risky. Any easing in economic growth coupled with a likely increase in expectations would make for a more testing fiscal arithmetic.

The larger than anticipated rise in public spending announced today means the Government deficit for 2018 is €445 million higher than indicated in the pre-budget documentation. At €535 million or 0.2% of GDP it is still very low but even this widening might forewarn of some slippage in fiscal control.

More importantly, the faster rise in spending was accommodated by budget day taxation measures that raised a net €495million, which may hint at the possibility that the Irish economy might move towards a trajectory encompassing a greater tendency towards rising Public spending and taxation. A tendency towards a similar balance in future budgets might be encouraged by the expenditure benchmark of the EU fiscal rules that allows public spending to rise faster than the economy provided this is accompanied by compensating tax increases.

Much of the commentary on the taxation measures in Budget 2018 may focus on the €335million in income tax ‘cuts’, a measure which falls some distance short of the adjustment that would be needed to index taxation in line with pay increases. This risks neglecting the significance of seemingly painless measures in the shape of some €830million of ‘stealth’ tax increases which will add materially to the cost base of the Irish economy.

There is an argument that some of the tax increases reflect health considerations, others may be presented as giving greater stability to State revenues and others again might be seen as moving back to a more ‘normal’ tax rate(as in the case of stamp duty on commercial property transactions). However, such changes could also increase uncertainty as to future tax flows because of the potential volatility in commercial property transactions.

Does the Budget simply point towards an election in 2018?

It may simply be the case that in order to show sufficient progress on their respective agendas or keep promises ahead of a potential general election in 2018 that the various parties involved in the programme for government all required the achievement of distinct expenditure goals that necessitated an unexpectedly wide trawl for sources of increased revenue.

A more worrying interpretation of the spread and scale of these measures would be that they hint at a tendency to see taxes primarily as a residual, acting to balance the conflicting demands of spending pressures and fiscal rules rather than as a key driver of Ireland’s competitiveness and economic sustainability.

If the measures adopted in Budget 2018 suggest questions about the future emphasis on public spending and tax as well as the intensity of future growth, the range of measures that relate to housing emphasise a determination to increase additional supply. The key uncertainty is the extent to which the combination of significant stick and carrot measures will change behaviour to the point where it prompts a material increase in supply. The combination of penalties entailed by the promised rise in the vacant site levy to 10% in 2019 and incentives most notably in in the shape of a drop from seven years to four in the retention period required to benefit from full capital gains relief on properties bought between 2011 and 2013 is notable. However, it is almost impossible to establish at this juncture how forcefully these measures will alter the trajectory of supply over the next two to three years.