Some combination of caution and support warranted by increasingly uncertain outlook

Ireland’s Budget 2017 which was presented today has to be seen in the context of a world that is currently struggling to get to grips with a range of political and economic uncertainties and a fair measure of political instability. Against this backdrop, the achievement by a minority Government made up of one political party and a loose alliance of independents in constructing a reasonably coherent budget package is unlikely to be lost on financial markets or international investors. As such, the delivery of a package of measures that keeps Ireland’s public finances on an improving trajectory while providing some modest support to activity and incomes in a still recovering Irish economy marks an achievement that shouldn’t be underestimated domestically. 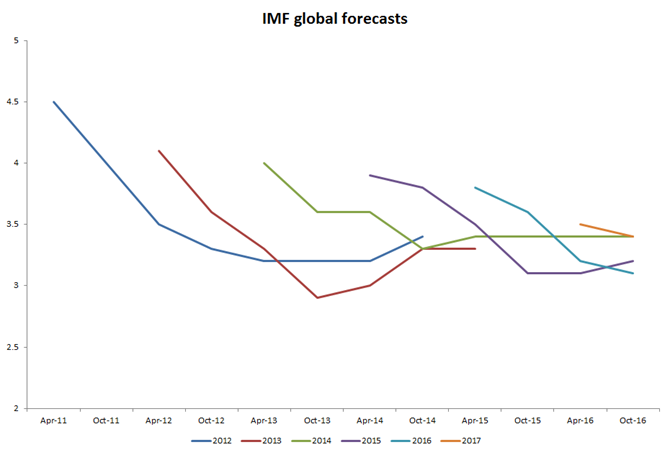 There are many reasons why a combination of fiscal caution and stimulus is warranted in 2017. An important consideration is capacity of the global economy to repeatedly disappoint expectations in recent years as diagram 1 illustrates. Notable headwinds are expected in the shape of continuing nervousness about emerging markets most notably China, increased uncertainty about the likely settings for fiscal and monetary policy in the US, ongoing concerns about the health of the Euro area economy and its financial sector and the particular importance from an Irish perspective of the UK’s stated intention to trigger early next year the start of the Article 50 process leading to its exit from the EU.

In many respects, Brexit is already well underway from an Irish standpoint. The diagram below hints at the importance that currency movements play to the health of Irish exports to the UK and the nature of the economic links between the two countries mean significant effects spill quickly across broad swathes of business.  The ‘domestic’ nature of these impacts makes a strong case for some offsetting fiscal stimulus as well as an intense focus on competitiveness. 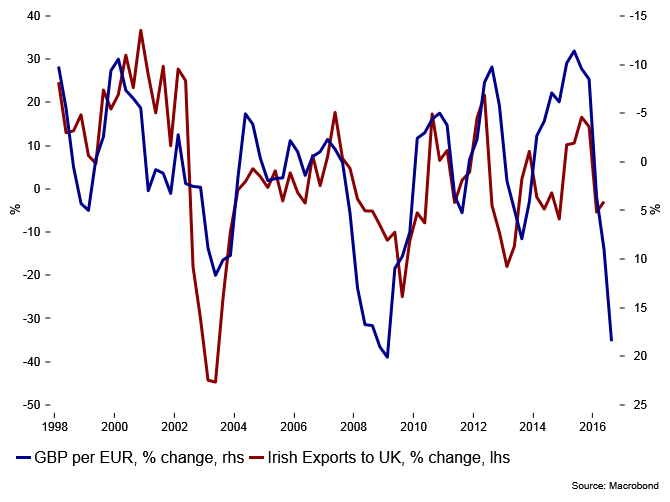 Of course, the case for a supportive fiscal stance in Budget 2017 is conditioned on the continuation of the improvements achieved through the exceptional and very painful progress made in restoring order to Ireland’s public finances in recent years. As diagram 3 below illustrates, the decline in the fiscal deficit whether measured in headline terms or adjusted to take account of cyclical and once–off influences has been substantial and sustained to the point where the public finances are now on a steadier trajectory that requires caution rather than cuts to be sustained.

The latest IMF projections suggest that only three EU countries will have a smaller deficit as a percentage of GDP in 2017 than today’s Budget data envisage for Ireland. While concerns about public deficits and debt must remain a key influence, they no longer must be the exclusive focus of Irish economic policy. 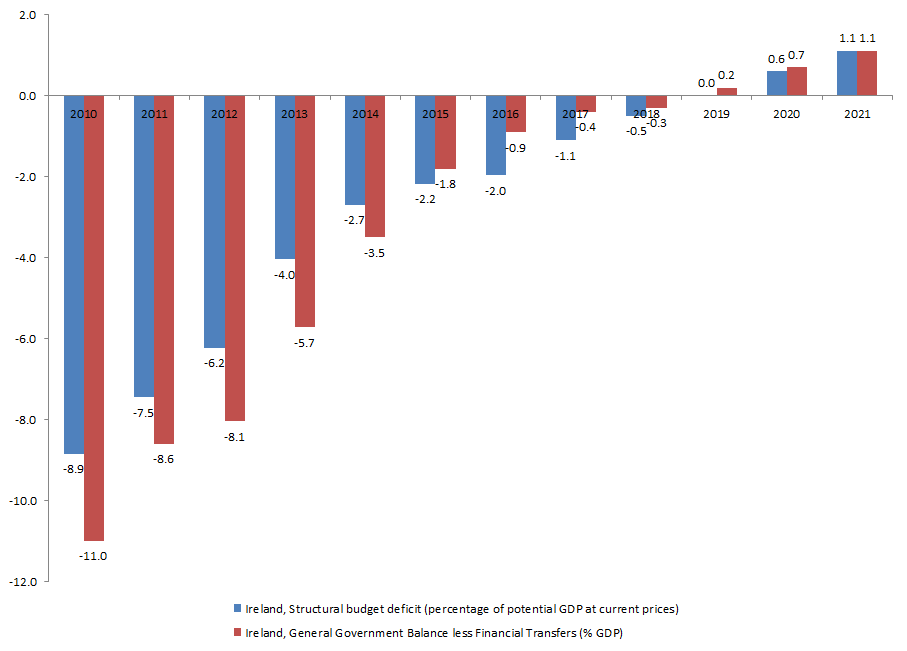 As we discuss further below, both our forecasts and those of the Department of Finance suggest Irish economic growth will slow materially through the coming year. While an expected GDP growth rate of around 3% in 2017 is still reasonably healthy, it is far from white hot and altogether remote from any  trajectory that might threaten overheating.  The trend in Irish wages and consumer prices has remained consistently soft even relative to subdued international trends. More importantly, an unemployment rate close to 8% coupled with a level of labour force participation, which is about 4% lower than before the crisis and a strong emerging inflow of further entrants to Ireland’s work force also speak more of unused potential than of emerging pressure on resources.

If budgetary and economic trends suggest some modest scope to support Irish economic activity in 2017, the question turns to whether Budget 2017 strikes the right balance between continuing fiscal progress and countering risks to the recovery. On balance, we think a little more might have been done to boost economic activity in the coming year. This follows from our estimate, consistent with Diagram 4 below that suggests, with the exception of the standstill Budget that followed the 2002 election, today’s adjustments to social welfare and taxation, relative to the size of the Irish economy, are the smallest announced for the past twenty years. 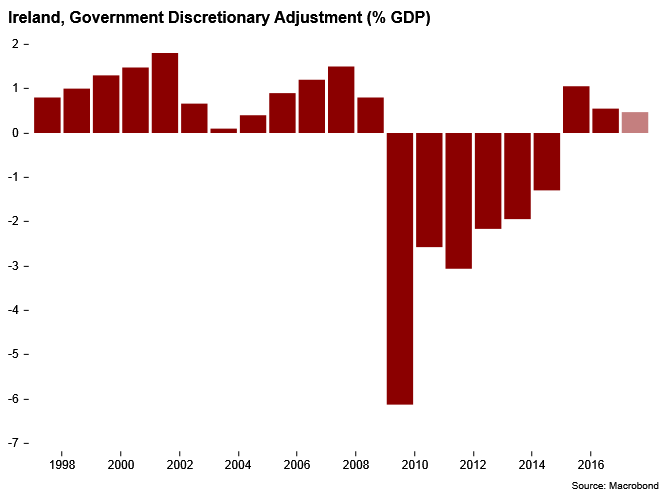 The relatively modest measures announced today amount to just under a half a percent of 2017 GDP. The envisaged scale of adjustments to public spending and income taxes does little more than ‘index’ these aggregates to expected increases in relevant prices and wages thereby preventing a deterioration in the real level of public services or an increased effective rate of taxation for workers getting even modest pay increases.

Arguably the most notable feature of Budget 2017 is its ability to make very little stretch quite a long way. This largely reflects how thinly the ‘goodies’ were spread. On the Minister’s own figures, the share of the workforce paying the higher tax rate will increase next year. Similarly, increases in welfare rates will probably only match the expected increase in the price of the relevant basket of goods and services and won’t come into effect until March of next year. In the same vein, spending on the new childcare scheme was partly offset by the absence of any increase in child benefit.

Understandably but importantly, concerns about the impact of Sterling weakness on cross-border shopping meant there were no increased taxes on fuel or alcohol. A sensitivity to the implications of Brexit for investment in Ireland may also have played some role in the absence of any attempt to ‘claw back’ the benefits to those classified as high earners of the cuts in USC rates. While it is virtually possible to ‘Brexit-proof’ the Irish economy, avoiding notable own goals is an important development.

The scale of measures announced today were restrained by problematic EU rules which rarely produce guidance appropriate to the peculiar contours of Ireland’s economic and budgetary requirements. In terms of the public spending benchmark, Ireland will marginally exceed the constraints imposed for 2017 but the improvement envisaged in the Structural Budget balance for 2017 of 0.8% of GDP next year is 0.2% of GDP greater than required. A somewhat different combination of spending and tax adjustments might have run into significant political opposition but it would have allowed marginally more leeway-- probably a few hundred million Euro – to support activity in 2017 than the Minister took.

Surprisingly, as diagram 5 suggests, the Department of Finance’s new projections envisage that potential growth in future years will be slightly weaker than previously envisaged. These calculations entail some understandably arbitrary assumptions about the implications of the outsized economic growth rate for 2015, as reported a couple of months ago (effectively ignoring the new figure).

Intuitively, it would seem more likely that some element of the upgraded growth is likely to have a lasting impact that would increase rather reduce future potential and we see some possibility that these estimates are eventually revised upwards, possibly materially. Of course prudent management of political as well as economic expectations would counsel caution as to how and when such adjustments might be sought.

In the event that today’s modest downgrade to potential growth is reversed, the EU rules imply that fiscal space could open up materially in coming years. In these circumstances, the likelihood is that political pressures will build and encourage altogether larger, probably inefficient and possibly inequitable ‘giveaways’ that may eventually prove unsustainable.

In regard to the short term outlook we have relatively little disagreement with the Department of Finances’s post budget projections as diagram 6 indicates. While KBC forecasts envisage a slightly lower pace of GDP growth this year and next than the Department of Finance, differences between the two are not significant. Importantly, both envisage a transition to a slower but still solid pace of growth through the next year or so largely reflecting softer exports growth on foot of Brexit concerns and a generally sluggish global economy. Domestic spending should be supported by pent-up demand and rising employment but in keeping with international trends wages and prices are generally expected to rise fairly modestly. 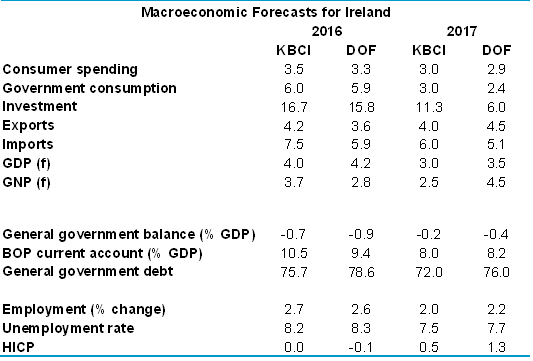 A year ago, we commended the absence of any marked fiscal intervention in Budget 2016. Our sense that this might point to lessons being learned from previous sorties into Ireland’s property market may have been misplaced. It remains the case that the over-arching problem in the Irish housing market is a shortage of new construction. As was the case two decades ago, supply is only slowly adjusting to persistent demand strength and sustained buoyancy in prices.

As diagram 7 shows, over the past three years, the amount spent by first time buyers on new homes has doubled. However, this increase largely reflects higher prices rather than more homes being purchased. It might seem optimistic to expect that the price/volume split will materially alter in the wake of the new income tax incentives for first time buyers. Indeed, to the extent that prices quickly discount the extra purchasing power, some borrowers may find it harder to comply with Central Bank lending rules. 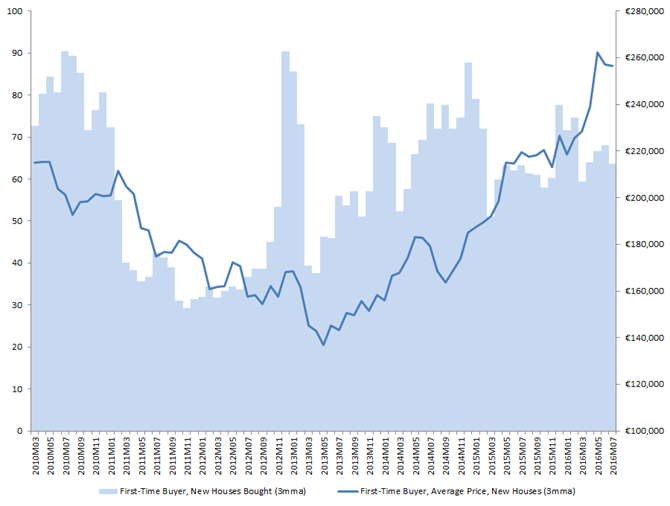