Budget 2015 Emphasises Boost To Activity Rather Than Cut In Borrowing

• Tax and spending measures suggest strong GDP growth to be sustained in 2015.

Budget 2015 marks a dramatic change in the fortunes of the Irish economy. The most notable aspect of the budget package is what it says about how far the Irish economy has come in recent years. A major improvement in economic conditions together  with the very painful adjustments undertaken in recent years mean that the target of reaching a deficit of under 3% of GDP has been reached without any additional austerity measures-indeed with some modest ‘giveaways’ being announced today. A year ago, it was felt that an adjustment of at least €2 bio would be needed to hit this target.

Official forecasts envisage Irish Government debt will drop to 110.5% of GDP at the end of this year and to 108.5% in 2015 from 123.3% at the end of last year. So, the broad budgetary arithmetic should sustain positive financial market sentiment towards Ireland.

Before considering what Budget 2015 means for the economic outlook in some detail, it is important to emphasise the nature of the improvement in Ireland’s public finances in recent years that culminated in Budget 2015’s greater than envisaged ‘fiscal space’. This improvement reflects two distinct developments. The first is the scale and scope of adjustments made through seven Budgets stretching back to late 2008. As diagram 1 indicates, some €30 billion of measures (equivalent to 20% of GDP) have fundamentally and permanently altered the trajectory of Government spending and revenues.

The second critically important factor driving the turnaround in Irelands Budgetary position is the exceptional resilience of the Irish economy. Following an outsized downturn in 2008/2009, a progressive if unbalanced turn has been underway for some time.  More recently, as diagram 1 indicates (the Euro qualifiers suggested an appropriate comparison in this context), momentum has picked up even if statistical changes have exaggerated the scale of the economic recovery in Ireland of late.

Budget 2015 had to strike a balance between encouraging a still uneven recovery and building political capital on one hand and reducing Government borrowing as quickly as feasible on the other.

Initially, it was envisaged that Budget 2015 would comprise cuts in public spending of around €1.3 billion and revenue increases of about €700 million. According to Minister Howlin, public spending in 2015 will be about €2 billion higher than envisaged a year ago while Minister Noonan suggested that  the tax measures he announced today would Budget 2015 Emphasises Boost To Activity Rather Than Cut In Borrowing14 October 2014 3 cost  a net €418 million next year. So, Budget 2015 marks a fairly radical departure from what was originally envisaged.

In commentary on Irish fiscal policy in recent years, we emphasised the importance of assisting a fragile economy back to health and argued that Budget policy should be calibrated to do the least possible damage to what appeared to be a tentative recovery overall and a household sector facing significant financial pressures.  Concerns about the durability of the upturn haven’t entirely disappeared and many household balance sheets remain stretched. Providing some support to spending power in Budget 2015 was understandable as were initiatives in areas such as social housing and teacher numbers. However, the general Irish macro temperature has improved to the point where the balance in Budget 2015 might have emphasised a slightly larger reduction in the deficit.

A year ago, the Department of Finance predicted that the Irish economy would grow by 2.0% in 2014 and by 2.3 % in 2015. It now sees growth of 4.7% this year and 3.9% in 2015. So, growth is roughly twice as fast over this year and next as originally expected. In these circumstances, it is slightly disappointing that the Government deficit sought for 2015 at 2.7% of GDP is just a shade below the original target of 2.9%. 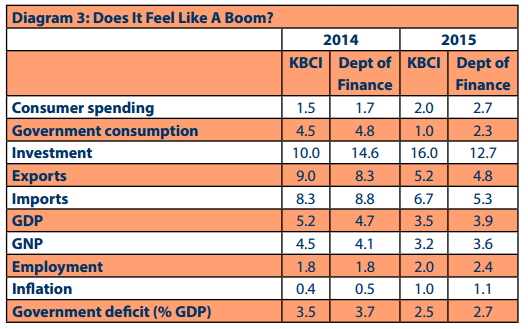 There is considerable uncertainty about the pace of Irish GDP growth likely to be achieved for 2014 as a whole and for the year ahead even if there is a broad consensus that it should be robust. KBC Bank Ireland’s forecasts and those of the Government, compared in Budget 2015 Emphasises Boost To Activity Rather Than Cut In Borrowing14 October 2014 4 diagram 3 above, show many similarities. We think this year’s outturn will be somewhat stronger than the official projections suggest.  The quarterly profile underlying the forecasts of the Dept of Finance envisages a significant pull-back in the second half of this year and a marked rebound through 2015. Our numbers imply a somewhat flatter if still strong trajectory in activity over the next fifteen to eighteen months.

For 2014, we broadly agree with the Department view in relation to key barometers of domestic activity such as consumer spending and employment. Several measures introduced in  Budget 2015 such as the reintroduction of an additional welfare ’bonus’ payment together with the marginal easing in the tax burden envisaged  next year should support a reasonably healthy run-up to the key Christmas spending period.

We are notably more cautious in respect of household spending next year than the Department of Finance which now envisages growth in consumer spending accelerating to 2.7% in 2015 from 1.7% in 2014 before slipping back to an increase of 1.4% in 2016.  This is a very unusual pattern particularly as the Department envisages household spending increases remaining both modest and below jobs growth throughout the 2016-2018 period. Our sense is that the Irish economy is now set on a reasonably solid path even if global uncertainties still abound (the materialisation of such risks is not hinted at in forecasts for exports). There may be some official inclination to play down the longer term prospects for domestic spending lest that sparks unreasonable expectations about the Budget leeway that might follow. Indeed, our general sense is that there is a decent prospect that Budget targets for next year could be exceeded (as our forecasts in diagram 3 indicate).

In summary, Budget 2015 does many things very well. It should broaden the reach of the recovery and attempts some response to substantial pressures in areas such as social housing and teacher numbers. It achieves promised deficit targets and facilitates a significant easing in the Debt to GDP ratio. Importantly, by setting out policy intentions to deal with contentious tax arrangements such as the ‘double Irish’ while proposing new support in areas such as intellectual property, it emphasises both the transparent and competitive nature of the Irish corporation tax regime. However, it may not be completely churlish too suggest that in terms of the balance between boosting activity and cutting borrowing, there is an argument for a little more emphasis on the latter than today’s budget contained.