This is the first post-bailout Budget

A subtle but significant change in emphasis.

• Future adjustments not specified. Is the Minister gambling on growth?

• From macro problems to micro prodding.

Although Budget 2014 can be seen as the seventh successive package of harsh fiscal medicine in a number of important respects, it marks a subtle but important shift from its six predecessors. In many respects, this is the first post-bailout Budget. Much of the heavy lifting to reduce the deficit is done and most of the legacy of the crisis in terms of unemployment is still with us. Some rebalancing of priorities is warranted although a large deficit and debt overhang coupled with a return to market funding mean there won’t be any dramatic policy shift. The key question is how the Irish economy can return to healthier growth. By not shocking fragile domestic demand and by helping job intensive areas such as tourism and construction, Budget 2014 should help Irish growth prospects for 2014.

The shift in Budget 2014 reflects changed circumstances in a number of areas. While the international backdrop is still testing, it is not nearly as threatening as it has been through recent years. Recent data from key trading partners have been broadly encouraging. The forecasts in Diagram 1 suggest the US economy looks set on a trajectory of modest but gradually accelerating growth. The UK economy has posted stronger than expected readings from a range of key indicators of late. And finally, the Euro area seems to have arrested a six quarter decline and a tentative improvement in activity has begun. Forward momentum in these economies remains constrained but the direction is at least positive. These developments limit some of the downside risks to the Irish economic outlook but imply a modest rather than marked improvement in the external backdrop to the Irish economy in the coming year.

At least as important as a somewhat healthier trend in economic activity abroad is a marked easing in financial market fears that an apocalyptic event might strike the world economy or financial system at any moment. This easing in ‘tail-risk’ owes much to a belief that the ECB (and other policy makers elsewhere) can and will do ‘whatever it takes’ to avoid destabilising outcomes. The markets growing confidence in this regard has meant that even another poorly structured EU response to problems in Cyprus earlier this year did not translate into widespread tensions. Similarly, markets remain relatively relaxed that the current partial Government shutdown in the US and the altogether more threatening possibility that the debt limit might be hit can be managed by US policymakers without the risk of major collateral damage.

These developments are evident in the marked easing in bond spreads shown in diagram 2 and suggest that the risk of future ‘contagion’ threats to the Irish public finances have eased somewhat. In turn, this argues that, at the margin, any ‘war chest’ whether expressed in terms of the amount of pre funding needed by the Irish Government or the pace of adjustment appropriate in Budget 2014 should be somewhat smaller than might have been envisaged a year ago. 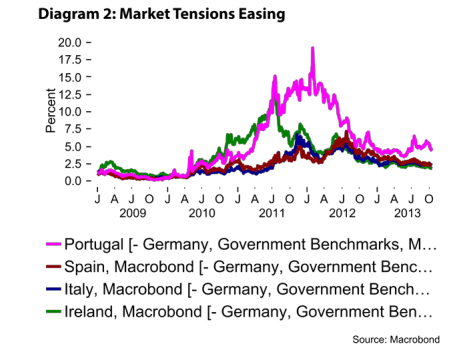 It is also the case that the broad trends in the domestic economy look somewhat better now than when Budget 2013 was being prepared. However, there remains some uncertainty as to whether a broadly based and durable upturn has yet taken hold. As diagram 3 shows, most forecasters envisage that a very subdued picture for 2013 will be followed by notably stronger conditions next year. While there may be strong reasons to believe that activity will strengthen in 2014, each of the previous two budgets saw expectations of healthy GDP growth in the following year hugely disappointed. Again, at the margin, this fragility might argue for a somewhat less severe adjustment than would otherwise be the case. 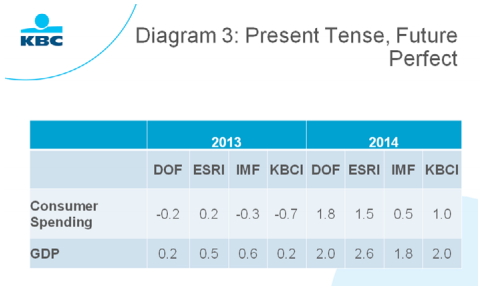 A further argument for a delicate touch in Budget 2014 is increased uncertainty about the likely condition of the Irish economy in the coming year that almost inevitably follows from moving the timing of the Budget to October. The earlier date clearly poses particular problems for projections of government revenues and spending but, more generally, predicting how an Irish economy at a turning point might perform that little bit further forward becomes more difficult. This means that unintentionally fiscal policy may be more likely to add to volatility in domestic economic conditions.

While we sense some slight shift of emphasis in Budget 2014, the broad contours of the adjustment remain firmly along the lines agreed with the Troika and anointed by the markets through the drop in Irish bond yields. As diagram 4 shows, the measures announced today bring the cumulative adjustment since 2008 to some €30bn or some 19% of GDP. For 2014 the Irish government deficit is also significantly below IMF and OECD estimates of the likely deficit in either Spain or Portugal. 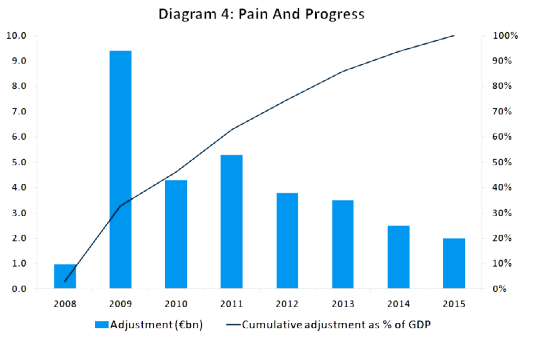 If Budget 2014 has stayed on a broadly consistent path in terms of the pace of adjustment, it has also focussed more attention on yet another fiscal measure—the ‘primary balance’. The primary balance is defined as the gap between public spending excluding debt interest costs and public revenues. This is regarded as an important indicator of whether a country’s Public debt is set on a sustainable course. Looked at in tandem with the interest rate that a country pays and its economic growth rate, it is possible to judge whether public debt is on a rising, stable or declining path. As diagram 5 shows, Ireland’s primary balance moved from healthy surplus to large deficit through the crisis but the fiscal adjustments of recent years have set it on a clearly improving trend. With borrowing costs easing and growth expected to improve, Ireland’s debt dynamics now look healthier and this trajectory should make it easier to return to market funding. 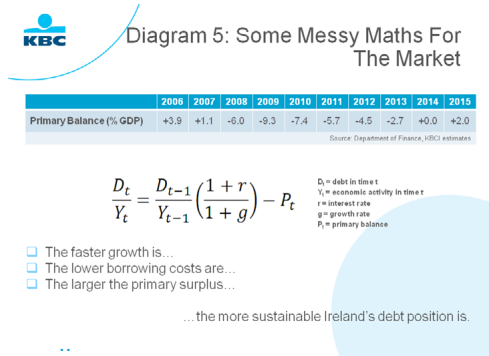 After large and painful adjustments to public spending and taxes in recent years, our judgment is that further improvements in Ireland’s debt dynamics are most likely to come from the economy moving onto a clearly stronger growth path rather than additional adjustments and this appears to be the view informing Budget 2014. It may also lie behind a break with recent tradition that set out prospective amounts of adjustment for following years.

Most recent Budgets contained documents setting out the broad parameters of future adjustments. On this basis, it was generally envisaged that it would take a package of around €2.0bn of additional adjustments in Budget 2015 to bring the General Government Deficit balance to 3% of GDP by that time. While Budget 2014 envisages a deficit of 2.9% of GDP for 2015 and a deficit of 2.4% for 2016, no specific details are provided as to how much or what form future adjustments might take. The ‘economic and fiscal outlook’ Budget paper simply states, ‘Further consolidation will be necessary to achieve this target in Budget 2015 but given the magnitude of previous budgetary adjustments, the required consolidation will not be as large. However this reduced fiscal effort is contingent on a continuation of growth, which is subject to a number of risks which are outlined elsewhere.

The growth performance for the Irish economy is becoming altogether more central to the outlook for next year’s budget. As diagram 2 indicates, our projections for GDP growth in 2014 are very similar to that of the Department of Finance. However, we are not as optimistic as the department on the outlook for consumer spending. In its pre-budget forecast a week ago, the Department projected at 1.1% rise in consumer spending on the back of a 1.4% rise in employment and an inflation rate of 1.5%. Now consumer spending is seen growing at a notably stronger 1.8% pace. This pickup is partly due to lower inflation now seen at 1.2%, largely due to the decision to retain the 9% VAT rate on tourism. Notwithstanding the Budget’s focus on job creation, the Department of Finance have only upgraded their employment growth forecast marginally higher to 1.5%. So, it may be that the faster rise in consumer spending owes much to positive confidence effects.  Significantly, stronger consumer spending doesn’t feed into stronger indirect tax projections (adjusted for the retained 9% vat rate). That said there could be some downside risks to what were already strong increases in these headings if a notably more buoyant consumer fails to materialise.

In his Budget speech, the Minister of Finance announced he was ‘introducing 25 pro-business and pro-jobs measures. The total cost of the tax elements is in excess of €500mn a year. This very significant investment is designed to help businesses in key sectors achieve their full growth potential and create jobs.’ Admittedly, some €350mn of this figure relates to the decision to maintain the 9% VAT rate for tourism related goods and services. The other relatively ‘costly’ initiatives in terms of the initial revenues foregone are the new home renovations incentive (-€62mn) and the abolition of the car travel tax (-€36mn).

In broad terms, these developments suggest the minister is open to new ideas in relation to initiatives that might spur activity and employment. He is also willing to make permanent the more successful ones even if that success is measured in terms of macro or sectoral developments rather than the impact on exchequer revenues. This may herald a range of ‘micro’ initiatives in coming years.

By and large, Budget 2014 contained few surprises in macroeconomic terms. Priorities are shifting from a narrow focus on cutting the deficit in the public finances to a more measured approach that puts more emphasis on nurturing growth. That said, money is still being taken out of the Irish economy in 2014 though importantly not through hikes in income taxes or cuts to the main benefit rates. The channels through which revenue adjustment is coming, such as the bank levy, higher DIRT, the  pensions levy and the cut in medical insurance tax relief may be seen by the Government as less threatening in terms of their immediate consequences for jobs and spending. While the scale of the deficit means that tobacco and alcohol were hit again, a more nuanced approach is also hinted at by unchanged petrol and motor taxes.

A sense of some fragility in Ireland’s public finances is hinted at in the revision to the 2012 deficit data that was released on October 14th by the Central Statistics Office. This shows last year’s deficit at 8.2% of GDP rather than the previously signalled 7.6% figure. The revision is technical in that it reflects the fact that government revenue from the sales of mobile phone licenses previously recorded in 2012 is now regarded as being received in 2013. In turn, that would reduce the projected deficit for this year by about 1.1% of GDP. However, there is a partly offsetting adjustment that moves receipts from the sale of the national lottery licence from 2013 to 2014. These developments suggest that a range of (completely appropriate) statistical adjustments can make the annual deficit data something of a moving target.