Budget 2013: Pain As Well As Progress

• So, domestic spending power will remain under pressure in 2013

The 2013 Budget adjustment has been made notably more difficult by a poorer global backdrop  that is acting to restrain the pace of economic recovery in Ireland. Table 1 below contrasts the latest OECD forecasts for 2012 and 2013 with the made a year ago to illustrate this point. The table shows that 2012 has been somewhat weaker than expected a year ago but a far more significant development is the deterioration in the outlook now predicted for 2013. The OECD’s current projections envisage that the performance of the Euro area economy in particular will remain very weak through the coming year. These developments will clearly weigh on Irish export growth. However, a small silver lining is that comparative economic weakness in the Euro area should limit any upward pressure on the Euro against the US Dollar and Sterling and should also mean ECB interest rates remain lower for longer. 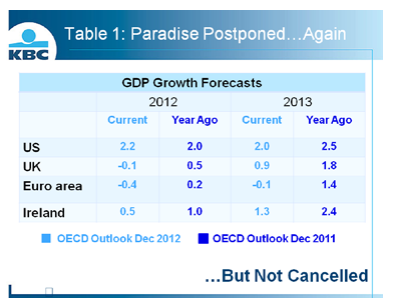 It should be noted that while the outlook for 2013 looks relatively weak, the risks of an altogether more dramatic deterioration in global conditions appears a good deal smaller than they were twelve months ago. This is largely because financial markets have taken the view that the European Central Bank decision to announce its Outright Monetary Transactions programme (OMTs) substantially reduces the risks of extreme outcomes or ‘tail risks’ to the Euro area crisis. As related fears gradually fade, the spending plans of businesses and consumers that were shelved because of extreme uncertainty may start to support activity.

The key task for Budget 2013 was to make further progress in reducing a still large deficit while trying to avoid the scale or sort of measures that might derail a relatively fragile domestic economy. Opinion differs as to how this might best be achieved but the complexion of Budget 2013 seems to be significantly informed by the tone of comments in the Troika statement of October 25th 2012 that followed the conclusion of the eighth review of Ireland’s assistance programme. It should be noted that the Government haven’t embraced the Troika’s advice in its entirety as this statement noted that ‘the authorities…are determined to meet the programme target for a Budget deficit below 7.5% of GDP for 2013’. Today’s Budget announced a target deficit of 7.5% of GDP for 2013 that likely reflects concern about the still fragile condition of the Irish economy and the potentially damaging consequences of implementing anything more than the minimum agreed adjustment for 2013. Quite apart from this judgement there is also a strong appreciation of the importance of under promising and overachieving in policy matters, rather than the reverse. As a result, the targets for 2013, while reasonably ambitious, appear attainable with any measure of good fortune in terms of the performance of the global economy and financial markets.

The particular package of adjustments set out in Budget 2013 can also be in the context of another part of the October Troika statement; ‘The measures adopted in Budget 2013 should be durable, as growth friendly as possible, and minimise the burden of the adjustment on the most vulnerable.

Following the extraordinary unravelling of the Public Finances when the crisis began, a key consideration in Ireland’s adjustment programme has been a requirement to introduce measures that promise lasting improvements  in the trajectory of public spending and taxation rather than once off benefits. Beyond this, however, is a strong sense that changes should also make the Public Finances notably less sensitive to even relatively limited fluctuations in economic conditions. The introduction of a property tax, the reduction in child benefits, signalled changes to pension reliefs and increases in motor tax rather than petrol duties all appear consistent with this consideration.

Burden Of Adjustment Falls On Consumers

The manner in which these changes have been introduced takes some account of Troika’s statement’s recommendation that measures should be implemented in as growth friendly a manner as possible. However, the thrust of Budget 2013 implies fairly strong views about how growth should be supported. The measures introduced today appear consistent with the view that the longer term fortunes of the Irish economy are altogether significantly influenced by what happens to domestic cost of production here rather than what happens to consumer spending.

The Budget largely avoided measure that directly raised business costs while introducing a range of adjustments that will pressure household spending power. As a result, the cost of consuming goods and services has been boosted across many headings but the costs of production have emerged relatively unscathed—although the disappearance of the weekly PRSI allowance for employees will have some impact on pay packets.

Aside from the economic rationale for this particular distribution of Budget adjustments, this approach may also have been suggested by the relative resilience of VAT receipts this year in spite of the 2 percentage point rise in the upper VAT rate in Budget 2012. This may have been interpreted as hinting at some capacity for the Irish economy to bear the burden of further increases in indirect taxes (even if excise duties have been comparatively disappointing). In contrast, the poorer performance of income taxes in recent months may have cautioned against any inclination to raise direct taxes further.

While Budget 2013 has not imposed any significant additional burden on businesses, it will take purchasing power out a struggling to sluggish domestic economy. As Diagram 1 indicates, there have been tentative signs that domestic spending has begun to bottom out of late. Modestly improving trends in consumer sentiment and in the unemployment rate emphasise recent gains but also the still troublesome levels of these indicators at present. 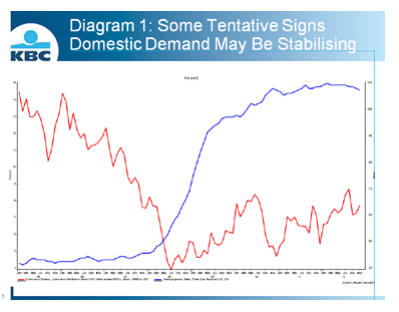 Budget 2012 will hit household spending power in a wide range of ways. Arguably, spreading the pain in this way is less threatening to the outlook for 2013 than a more concentrated ‘shock’ might be.  However, the risk is that consumer spending could be somewhat weaker than the 0.5% decline envisaged by the Department of Finance. Our own tentative estimate suggests a decline closer to 1%. In turn, this implies some element of downside risk to the Department of Finance forecast for growth in the Irish economy as a whole next year. Again, as Table 2 shows, our judgment at this point would be that GDP growth might be around 1.3% rather than 1.5% and GNP growth could be in the region of 0.5% rather than 0.9% but these are not particularly significant differences. As noted above, the more notable feature of Budget 2013 appears to be a willingness to accept further weakness in domestic demand rather than significantly add to the costs of doing in business in Ireland. 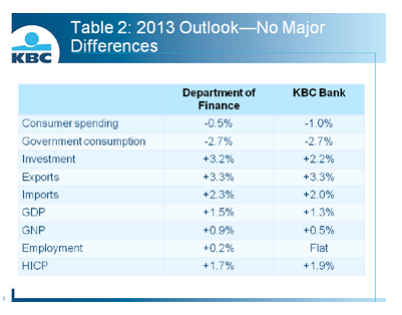 Much of the public commentary on Budget 2013 is likely to focus on equity issues. Again, the particular options chosen seem consistent with the conclusions of the analysis contained in the selected issues paper published by the IMF in September following its regular Article IV consultation with Ireland. As Diagram 2 taken from that paper shows, social welfare rates generally doubled and more than trebled in the case of child benefit through the boom and remain substantially higher now than had they simply followed the broad tend in economic activity. In these circumstances, pressure for further significant savings in the main welfare areas is likely to remain in place. 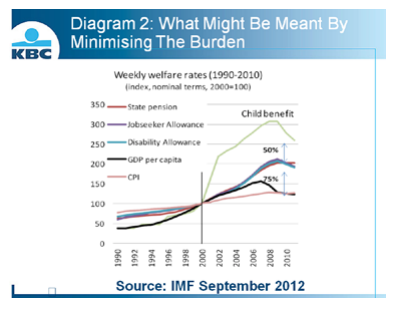 Impact On The Property Market

Budget 2013 entails significant compromises and trade offs. In many instances, these reflect substantial difficulties in balancing conflicts between efforts to permanently improve the trajecotry of revenues or Public spending, to avoid a sharp decline in economic activity in 2013 and to ensure some element of fairness. As noted above, these three considerations tended to show a consistent ordering in most instances. However, the manner in which the residential property tax has been introduced hints at a strong concern that a tentative stabilisation in the Irish property market should not be threatened. The well signalled decision to opt for a market value based tax rather than a potentially more complex site value tax likely reflects the importance attached to avoid creating further uncertainty. More importantly, the decision to introduce this tax in a phased manner, at an initially low rate and to incorporate exemptions for new purchasers underlines the importance of a stabilisation in the property market to the health of the broader Irish economy.

Weak domestic demand conditions and a relatively modest impact from the property tax are likely to see the residential market follow the broader Irish economy into what could be an uneven and extended ‘bottoming out’ process in the next year or two. A more pronounced recovery is likely to await a notable strengthening in domestic conditions generally and a clear pick up in employment in particular.

The Next Major Task

There is little question that the delivery of Budget 2012 has been a difficult process and its near term effects will weigh on consumer spending. As a result, Irish economic growth will remain modest in 2013. However, as Diagram 3 shows, determined efforts entailing adjustments total 2.5% of GDP will see the deficit fall by only 0.7% points from 8.2% of GDP in 2012 to 7.5% of GDP in 2013. While this limited improvement owes something to a difficult economic backdrop, the key influence is the impact of €1.9 bio (or 1.1% of GDP) in interest payments on promissory notes. 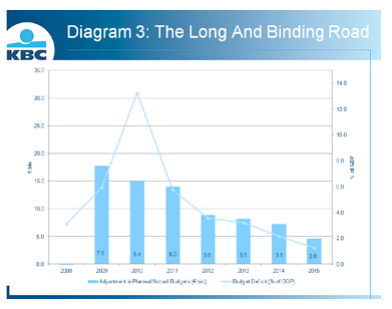 Budget 2013 delivers on promises made to Ireland’s EU partners but also emphasises the severe difficulties entailed in meeting these commitments. This implies that the key task immediately facing the Irish Government is to ensure that Ireland’s EU partners live up to the unambiguous commitment given at the June EU summit to ‘further improving the sustainability of the well performing adjustment programme’. Early progress in this regard could be the swing factor in determining the speed and extent to which the Irish economy returns to a more promising ‘new normal’.