Brexit: it’s not today but it’s not going away

Embedded uncertainty likely to remain a feature for 2020

The crooked path to Brexit continues to take us into uncharted territory. In large part, the related difficulties are the result of deep and widening  internal divisions within the UK that are unlikely to heal anytime soon. Such difficulties will act to constrain UK economic growth and, as a result, will also weigh on Irish economic growth prospects.

While an exit agreement now looks possible, and maybe even probable, it is still far from certain. More significantly, Even if a withdrawal agreement is reached, we may now simply be moving into a new phase of Brexit related uncertainty that will weigh on the outlook for the Irish economy. While recent developments suggest a Brexit ‘blowout’ may be avoided, at very best, it may put a slow puncture in Irish growth prospects in coming years.

In the table below, we contrast current KBC Bank Ireland forecasts which are predicated on the basis of a Free Trade Agreement between the UK and the EU with the recent forecasts from the Dept of Finance  which assumed a ‘Hard Brexi’t scenario. While the increased prospect of a Brexit deal markedly improves the outlook for 2020 as reflected  in the difference between KBC and Dept of Finance forecasts, this is partly offset by a markdown of the growth outlook for subsequent years stemming from the more orderly but material negative impacts of the UK’s departure from the EU.

Even in 2020, the ‘embedded uncertainty’ facing Irish business and households through a year of potentially tortuous talks around a permanent economic relationship between the UK and EU is likely to translate into a material shortfall in Irish economic growth relative to a ‘no Brexit scenario’.

KBC forecasts for subsequent years envisage a significant dampening of growth momentum as the Irish economy adjusts to notably fractured economic flows to and through the UK as well as the likelihood of weaker economic performance of the British economy. 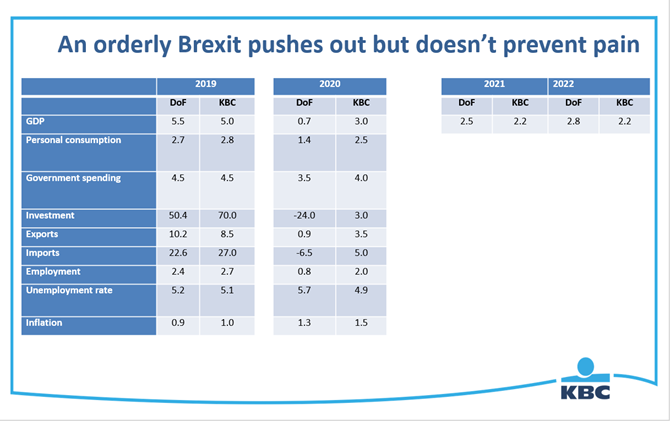 In the near term, the focus on Brexit will be through the prism of the looming UK election and the potentially much changed political  political landscape it produces. Although it is widely expected that the Conservative party will return to power with a clear majority, opinion polls have given several seriously misleading signals in recent years both in relation to the general elections of 2015 and 2017 and in relation to the Brexit referendum itself.

In spite of the UK’s ‘first past the post’ electoral system, two of the past three general elections have produced a hung parliament and the UK political establishment is having notable difficulties operating in this environment. Even if the election produces a decisive result, changes in philosophy and personalities suggest that political turmoil may continue to weigh on the UK economic outlook in coming years and, consequently, on that of all its economic neighbours.

A second and potentially far more important source of uncertainty centres on the sort of permanent economic ties that will follow from Brexit. The future long-term relationship between the UK and the EU is only vaguely outlined in the  Political Declaration accompanying the withdrawal agreement.  It remains to be seen how that document’s good intentions will translate into a detailed trade agreement between the UK and the EU27, as well as broader agreements on investments regulatory cooperation, migration and labour mobility rights.

Although the newly revised political declaration confirms the ambition to conclude a free trade agreement with zero tariffs and quotas between the EU and UK including guaranteeing a level playing field for fair competition, this commitment is not legally binding. There may well be a trade-off for the future British government between reaching a comprehensive trade agreement with the EU and concluding various comprehensive trade agreements with other trading partners. The end result could be a quite limited future UK integration with the EU.

To the extent that economic ties between the UK and EU are loosened, UK economic performance is expected to suffer. Estimates of how damaging the fallout differ widely. A study by the UK Treasury suggested that Non-tariff barriers and customs costs would result in a markedly greater economic loss in circumstances where the UK opted for a free trade agreement along the lines mooted by Boris Johnson’s government as opposed to the closer links envisaged in Theresa May’s proposals.

The diagram below taken from the UK Treasury study implies a deal along the lines now being proposed is materially better than a ‘no deal’ outcome for the UK but its economic costs are materially larger and much closer to such an outcome than those from original ‘white paper’ proposals put forward by Theresa May.

While there remains such uncertainty around the nature and timing of an eventual deal, any estimates of the likely scale of its impact on the Irish economy are subject to very wide margins of error. Mindful of this caveat, our tentative calculations suggest that Brexit -related constraints on Irish economic growth are likely to pare Irish GDP growth by about 0.5-0.8% in each of the next three years.