Current reading neither particularly positive or panicky , but…

An uncertain economic outlook and related worries about the outlook for household incomes caused Irish consumer sentiment to weaken in April. The slide in confidence last month hints at a nervous Irish consumer who may be concerned that the best of the recovery may be behind them. However, job gains and a growing population mean that the Irish economy should still see a solid increase in consumer spending in 2019.

The KBC Bank/ESRI consumer sentiment index fell to 87.7 in April from 93.1 in March. That 5.4 point decline largely reversed the previous reading’s 6.6 point monthly gain which had raised the index from the fifty one month low point of 86.5 recorded in February.

April survey suggests caution and confusion but confidence not collapsing

It is important to put recent disappointing confidence readings in context. The weakening in the survey for April means the April reading is among the lowest in recent years but sentiment is now broadly in line with the long term average of the survey (88.1), implying the Irish consumer is neither particularly optimistic nor pessimistic at present. Possibly of equal importance, the strong message of ‘choppy’ survey readings in recent months is that the typical Irish consumer is struggling to make sense of very unclear but threatening economic circumstances at present.

The clear weakening in Irish consumer sentiment in April coincided with notably smaller declines in similar confidence indicators for the US and Euro area thatmay owe something to a widely shared uncertainty about global economic prospects. This could also reflect common, immediate and very visible difficulties for household finances such as those posed by a sharp rise in international energy costs of late.

April saw the glass half empty

All five main elements of the Irish consumer sentiment index recorded weaker readings in April than in March but the change in thinking on ‘macro’ issues was relatively modest. In part, that could reflect a continuing sequence of positive domestic economic releases that may have significantly offset an exceptionally gloomy IMF assessment of the global economic outlook, particularly in circumstances where Irish consumers are currently positioned for bad news; only one in five consumers now expects the Irish economy to strengthen in the next twelve months whereas two in five see it becoming weaker.

There was little clarity on Brexit through the survey period and while the likely postponement of the UK’s exit lessened the near term risks, the continuing shadow cast by such uncertainty remains a drag on Irish consumer sentiment. As in March, opinion was fairly evenly divided in April as to whether the employment situation in Ireland would get better or worse in the year ahead.

Irish consumers were marginally less positive in April in their assessment of how their household finances had developed in the past twelve months but slightly more continue to report an improvement (23%) than a deterioration (17%). However, there was a notably increased level of concern about future trends in household finances.

The April survey saw a clear weakening of the outlook for household spending power in the coming year and a corresponding scaling back of spending plans. The drop in expectations for future financial circumstances may partly be a reflection of a surprisingly positive reading in this area in March. It likely also owes something to significant increases in areas such as energy bills as well as an uptick in prices in a ranger of areas including food and clothing of late. Finally, it could be a mechanical adjustment of earnings expectations to a poorer economic outlook. Not surprisingly, this deterioration translated into a notable scaling back of spending plans in April.

Boom or Gloom; what are sentiment and spending saying about the Irish consumer in early 2019?

Can the weakness of recent consumer sentiment surveys be reconciled with strong retail sales data for March?  Beyond our assessment that current sentiment reading signals caution rather than a collapse in confidence, we think any gap there may appear to be between the two indicators can be significantly bridged when account is taken of three factors.

First of all, the consumer sentiment survey index sets out to measure the thinking of the typical Irish consumer in relation to their economic circumstances whereas retail sales measure the aggregate sales of Ireland’s retail sector.  The diagram below illustrates the extent to which Irish household spending power is now being underpinned by an increase in the population and the number of households rather than any surge in the spending power of individuals.

At the end of 2018, aggregate household income was 12% higher in inflation adjusted terms than at its 2008 peak. However when adjusted for the increase in Ireland’s population in the interim, the increase for the average individual falls to just under 1%. Moreover, because CSO data suggest the number of households has increased faster than the population since 2008, the spending power of the average Irish household is still almost 4% below its 2008 level. When account is taken of demographic changes, most Irish households may have seen significant improvements in their living standards from the low-point of the financial crisis but they are unlikely to feel notably better off than in the pre-crisis period. So, the notion of a consumer boom is likely to appear quite remote from the minds of most consumers. 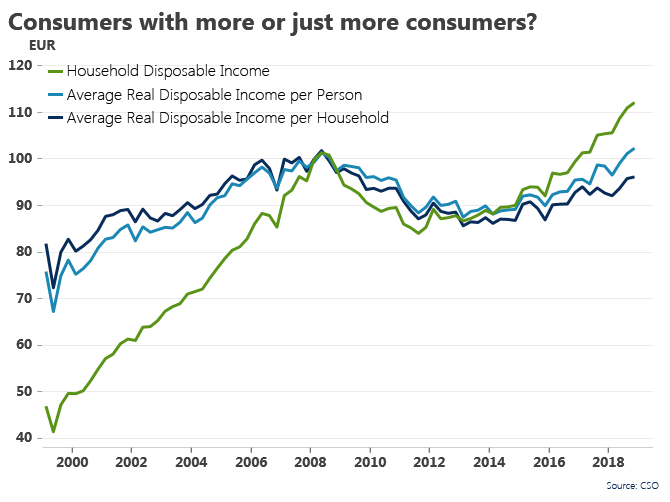 A second consideration explaining some of the gap between sentiment and retail spending is the prevalence of price discounting. A drop in retail prices of 1.5% mean the value of retail sales (excluding cars which wouldn’t normally be funded out of income) was 4.2% higher in the first quarter of 2019 than a year earlier. As household income grew 6.4% y/y in late 2018, this suggests that in aggregate, in value terms, retail spending growth is falling short of household income growth, an outturn consistent with the cautious tone of the sentiment survey. 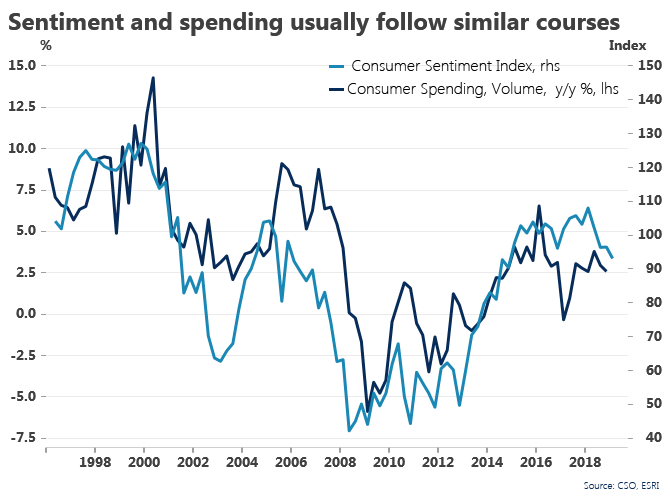