Irish house price data for April showed a small monthly drop of 0.2% which translates into a modest decline in the annual rate of property price inflation to 0.5% from 0.9% in March. As the diagram below illustrates, the year on year increase in April marks a renewed easing towards the six and a half year low  of 0.3% seen in December 2019 and may signal a the start of a softer trend in coming months.

Given the stretched nature of the home buying process and lags in registering the completed transactions, these data still largely reflect property sales undertaken before Covid-19 hit the Irish economy As such, any impact from the pandemic is likely to be marginal at most. 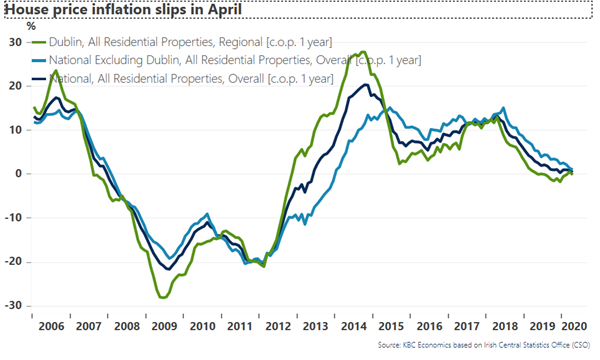 The softer April data largely reflect weakness in Dublin property prices which fell 0.7% month-on-month, the first monthly drop since December. Given, that the monthly fall was particularly pronounced in Fingal, there may be some impact from new supply as well as broader affordability constraints.
Outside the capital, property prices increased 0.2% month on month to stand 1.1% higher than a year earlier. However, the regional picture was mixed with a softening trend becoming more pronounced in the Mid-West, South-East and South-West.

It may be some time before the scale or precise nature of the impact of the pandemic on the Irish homebuying market becomes clear. The major effect is likely to be felt through the marked weakening in ‘macro’ conditions in the Irish economy, particularly in relation to weakness in employment and incomes. Pre-existing affordability constraints in some segments and the softish trend seen in the April data would also point in this direction.

The diagram below illustrates how the contours of Irish house price inflation have generally followed the broader trend in job growth but the degree of change in employment has typically been amplified in respect of house prices. In circumstances where most forecasters envisage a sharp weakening in the job market at very least in the short term, this might be expected to weigh materially on property price inflation. 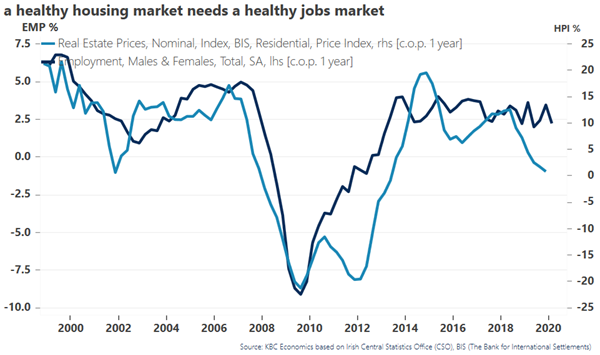 However, it should also be emphasised that current circumstances are very different from a ‘normal’ downturn. There are several other potentially significant considerations that may play a major role in determining how far the Irish property market might weaken and how fast it may rebound.

One notable aspect is the prospect of a significant curtailment of new housing supply in 2020 and the extent to which this could be offset at least in part by efforts to reduce emerging excess capacity in the rental sector. Another important element is the still unclear impact of increased uncertainty and health concerns on buyer behaviour as well as potentially large shifts in accommodation priorities. Potentially significant interventions in various parts of the housing market by the incoming government could also affect the trajectory and timing of property purchases.

Beyond these ‘fundamental’ issues, there is also a potential for the speed and spread of health related restrictions to substantially weaken the signal to noise ratio in official property price and transactions statistics, thereby further clouding the picture in relation to the true condition of the sector. The CSO noted that transactions used for the April property price analysis were about 40% lower than in March and indicated that further declines may have implications of the manner in Irish property price trends can be measured.

Although we feel the very short term outlook may point towards a clear deterioration in housing market conditions, the potential degree and duration of such difficulties should be reduced materially by the stark difference between demand/supply conditions in the housing market at present and those that prevailed in the mid to late 2000’s. The diagram below gives some sense of that difference which is also reflected in the continuing strength of the recently released KBC Homebuyer survey. 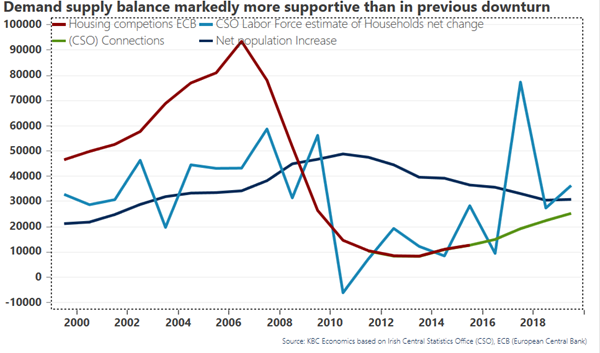