A year of two halves in a multi-speed Irish property market?

Irish house price inflation accelerated for the eighteenth month in a row to reach 15.3% in February, the fastest increase since a 15.4% rise in April 2015.

Transactions in February were 11.8% higher than a year earlier, further underlining the current buoyancy of the property market and reflecting robust homebuyer demand on strong jobs growth and supportive demographics in circumstances where new supply remains scarce.

House price inflation could pick up further through the spring months but some gradual easing may follow as 2022 progresses because concerns around ECB rate increases before end-year coupled with cost of living pressures may dampen demand somewhat. 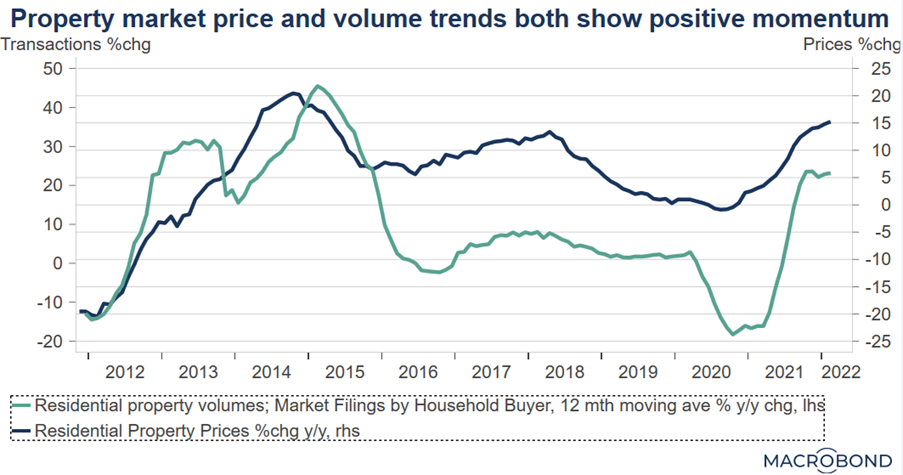 The strength of the Irish residential property market at present is further underlined by the fact that official data for February indicate that Irish housing prices are just 2.5% from their 2007 peak, effectively reversing the 55% slump seen between 2007 and early 2013.

On current trends a new all-time peak in Irish property prices is likely to be seen in the second quarter of this year. Indeed, given the lags between sales being agreed and purchases recorded, the likelihood is that transactions are now taking place at record prices.

As has been the case for some time, momentum in Property prices outside Dublin is somewhat stronger than in the capital. As a result, property price inflation in Dublin at a robust 13.5% y/y in February was overshadowed by a 16.8% across the rest of the country.

More generally, as the diagram below suggests, price gains through the past year have tended to be slowest in areas where the absolute level of property prices is comparatively expensive. This likely reflects a combination of factors. First of all, affordability issues are likely curbing demand, and, consequently, restraining the pace of price increase in higher price areas.

In addition, the increased incidence of  ‘working from home’ in recent years and the prospect of a greater degree of ‘blended’ working in the future has supported buying in more ‘remote’ areas. Some of the increased savings built up through the pandemic may also have been directed towards purchases of second or holiday homes.

Finally, a lack of any significant volume of new building outside the main urban centres in recent years means that even modest increments in demand can result in outsized increases in price. However, it should also be cautioned that relatively small numbers of transactions may skew these results and lead to significant volatility from month to month. 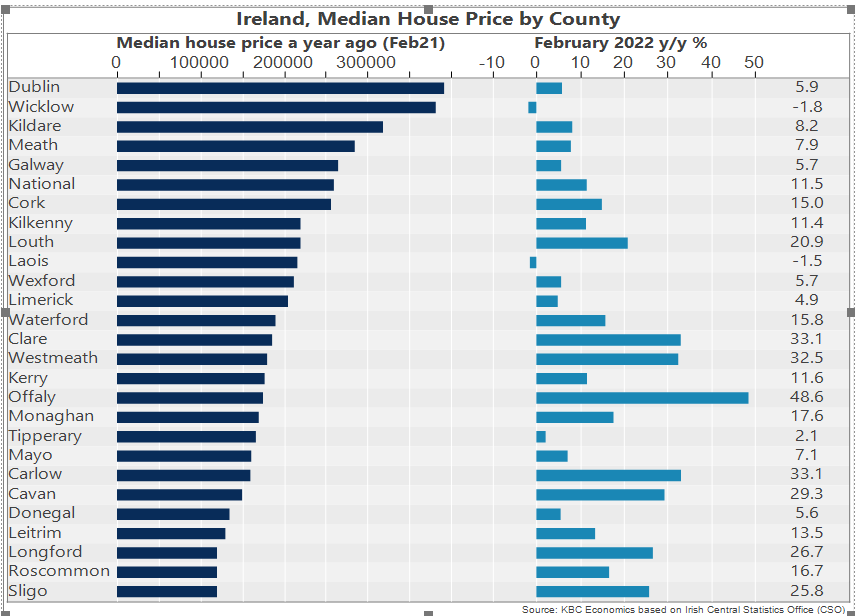 As 2022 progresses, Irish house price growth may ease on reducing affordability and the dampening effects of looming ECB rate increases, cost of living pressures and uncertainties around the economic outlook.

Although there appears to be a still significant element of pent-up demand, the impact of additional pandemic savings might be expected to gradually diminish and eventually be offset by the adverse impact of increased living costs on savings capacity. However, this process is likely to be uneven. For example, higher transport costs and the particular price pressures seen recently in home heating oil might weigh on future price growth in more remote areas.

A more significant headwind against ever higher rates of property price inflation is the increasing prospect of higher ECB interest rates before end-year. Although market expectations currently centre on a relatively brief and reasonably limited rate rising cycle, the fear of a material change in the borrowing climate  coupled with the shadow cast by the Russian invasion of Ukraine on the outlook for the Irish economy may prove sufficient to produce a bumpy slowdown in Irish property price inflation later in 2022.