A tale of (at least) two Irish economies

Numbers could be interpreted as suggesting overheating or recession

We also feel consumer spending may be under-recorded

Today saw the release of revised figures for 2017 and initial estimates for Q1 2018 for Irish GDP. For what it’s worth, Irish GDP is now estimated to have increased by an impressive 7.2% in 2017, albeit slightly below the initial estimate of 7.8% growth. However, between the final three months of 2017 and the first quarter of 2018, GDP fell by 0.6%, an outturn that seems at odds with most other indicators of current Irish economic conditions.

Our broad judgement is that the 2017 GDP figure somewhat overstates the true momentum of the Irish economy while the Q1 figure does not adequately reflect sustained if more modest growth in the Irish economy of late. For what is worth, there is little in today’s data that would cause us to alter our existing forecasts that envisage headline GDP growth of 6% in 2018 which we see as consistent with an underlying increase in activity in the region of 4%.

These GDP figures, while compiled according to best international practice, are becoming less and less representative of the economic environment facing most Irish based businesses and households. It is now questionable whether this measure helps or hinders our understanding of what is going on in the Irish economy at present.

The main reason for this difficulty is the impact on these metrics of the activities of a small number of globally large multinational companies based in Ireland. However, there are also some indications of notably smaller but still important difficulties in relation to the measurement of consumer spending of late.

The main impact of the multinational related difficulties is to exaggerate both the level and pace of growth in economic activity in Ireland. One indicator of the scale of this issue is provided by a comparison of GDP with GNI*, an indicator that was designed to adjust for these issues by excluding specific multinational activities. In 2017, Irish GDP is estimated at €294bn while GNI* is estimated at €181bn meaning the GDP figure exaggerates the size of the underlying Irish economy by some 62%. 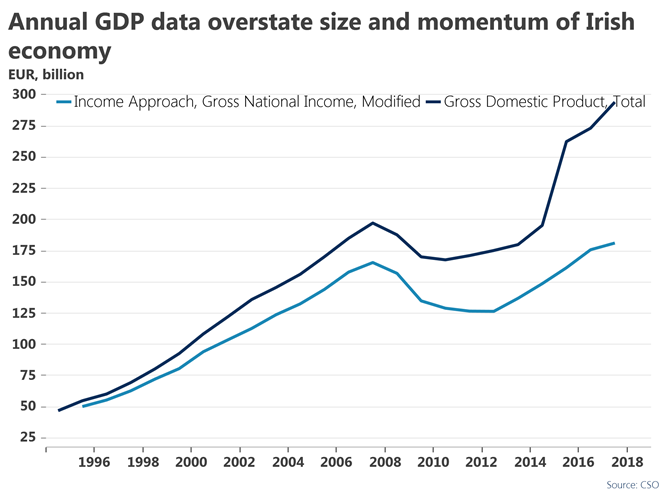 Unfortunately, GNI* is not available on an inflation adjusted or ‘real’ basis. Neither is available at quarterly frequencies and, finally, GDP remains the international standard for comparisons across counties and, consequently, for key indicators used to assess the state of the public finances.

While GDP problems could be manageable if these data followed the contours of the broader Irish economy, today’s figures forcefully demonstrate that this is not the case. In 2017, Irish GDP growth is now estimated at +7.2%, the fastest in the EU (with EU 28 growth put at 2.6%). However, this measure might appear to suggest there has been a dramatic turnaround of late as, in Q1 2018, Irish GDP growth is now estimated at -0.6%q/q, the weakest in the EU. This is largely the result of a sharp quarterly drop in exports (-5.8%) that reversed the buoyant growth of the previous quarter (+6.9%).

In fact, were it not for a large build-up of inventories likely associated with one large multinational’s roll-out of  a new model that , Irish GDP would have fallen by 1.9% in the first quarter rather than by 0.6% (the same multinational may have contributed forcefully to the swing in exports between Q4 and Q1) . As this multinational’s draws down its inventory, it is plausible that this could weigh heavily on Irish GDP for the second quarter, possibly prompting another negative reading and meaning on the basis of the shorthand of two consecutive quarters of negative growth -often used to define a recession- Ireland could slip into a technical recession this year. However, we would emphasise that such an outcome would be entirely statistical rather than reflective of deteriorating economic conditions.

Indeed, using GNP rather than GDP, Ireland is already in a technical recession- something that is entirely at odds with the broader picture emerging from most short term indicators that point to relatively robust and broadly based growth. In this context, employment growth was 0.7% in the first quarter in contrast to declines of 0.6% and 4.9% in GDP and GNP respectively while business and consumer surveys point to uneven but clearly positive growth. 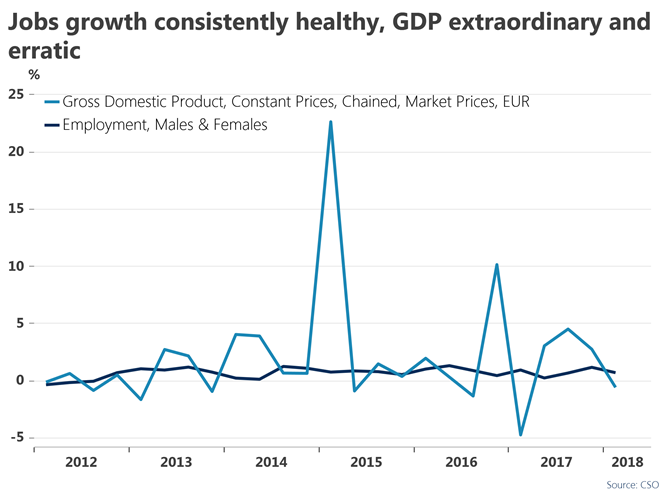 It is entirely understandable that the rapidly changing activities of a small number of very large multinationals can cause measurement problems for a small economy. However, today’s data were also surprising in terms of measured developments in consumer spending. The increase in household outlays in 2017 has been revised down from an initial estimate of 1.9% to 1.6% in today’s numbers. In circumstances where employment increased by 3.7% (in terms of full time equivalents), where average earnings increased by 2% (outpacing inflation by 1.6 percentage points) and consumer sentiment trended higher, it is difficult to see why consumer spending was so restrained.

Our sense is that these numbers aren’t accurately capturing changes in the volume of household spending because of difficulties adjusting for price falls in a number of areas. One such area is car sales where there has been a marked switch from new sales to purchases of used imports. More generally, intense competition across many consumer areas may be reducing prices in a manner that isn’t fully being captured in the national accounts data. We reckon that the underlying increase in consumer spending is likely to be running close to the increase in employment which was 2.9% y/y in q1 2018.

In one sense, the problems with today’s figures might be dismissed as a bad example of the old adage ‘lies, damn lies and statistics but it is very important to be entirely clear what is happening   in the Irish economy at present if domestic policy is to be properly informed. For example, concerns about overheating would sit uneasily with the suggestion that Ireland might be in or moving into a technical recession.

Even if we rightly dismiss the vagaries of quarterly GDP or GNP numbers the notion of a very sub-par consumer seems significantly at odds with the perception of an Irish economy bursting at the seams. Today’s data do show a 42% increase in spending on dwellings but it would seem imprudent to regard this as the only metric that matters in terms of overheating.

Aside from these important practical policy questions comes the more vexed issue of Ireland’s potential growth rate, with the divergence between GDP and domestic indicators implying measures such as the ‘structural balance’ in the public finances risks becoming increasingly detached from the true positon of the Irish economy.  As this measure is hugely important in deciding the scale and direction of measures in Budget 2019, problems in this area are far more than academic.