Preliminary data for early 2021 show Ireland’s population currently stands at 5.011 million. The population is now over 5 million for the first time in in 170 years (census 1851 5.1 million) and also represents an increase of 2.19 million or 77% on the low-point recorded in the census of 1961. This outcome reflects not only Ireland's exceptional pace of increase in recent years but also the unique historical experience

While there is some trend easing in what is by international standards an exceptional speed of population growth in Ireland, the slowdown in the past year can be significantly attributed to pandemic-related restrictions on international travel. This suggests scope for some compensating rebound in pace of population increase through the next couple of years. In turn, this suggests demographic factors look set to  remain an important source of both support and pressure for the Irish economy for some time to come.

Not surprisingly, the slowdown in Irish population growth in 2021 was primarily driven by a sharp fall-off in net migration reflecting health related restrictions on travel. Net inward migration was markedly lower at just 11k compared to 29k in 2020. While the ‘natural’ increase (births less deaths) also slowed marginally to 23k from 27k, this was largely due to  the persistence of a downward trend in births rather than a marked change in the death rate that rose only modestly from just over 31k to just under 32k .

It remains the case that Ireland’s current demographic trajectory is very different and altogether more favourable at present to most other advanced economies as the diagram below illustrates. The latest 0.7% population growth figure for Ireland should be seen in the context of initial estimates for January 2021 that suggest population growth has turned marginally negative (-0.1%) for the EU 27 (excluding UK) from a slight increase (+0.2%) the previous year while earlier pre-pandemic data show annual increases of 0.4% in both the US and UK. 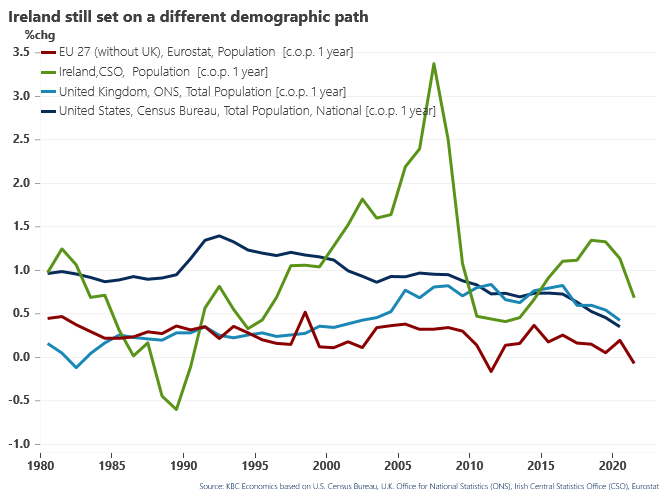 The comparatively rapid increase in Ireland’s population offers substantial economic opportunities in the shape of an increasing labour force and less immediate ageing pressures that provides an altogether more supportive backdrop than that now facing many EU countries.

While there is no automatic relationship between population and GDP growth, Ireland’s continuing demographic dividend should provide a positive impetus to economic activity in coming years. This profile is also supportive of a significant increase in public investment spending to provide the economic and social infrastructure consistent with a growing labour force and population.

Ireland’s demographic trends also pose more significant challenges than those faced by others in areas such as housing as well as the capacity to shape policy changes to fully utilise current resources such as young entrants to the post-pandemic workforce. There is also a significant risk that policy is not adjusted in a timely manner in areas such as pensions or healthcare to prepare for future demographic challenges.

Looking at the details

The slowdown in Irish population growth in 2021 is largely the result of a marked drop in inward migration. As the diagram below indicates, the number of immigrants fell to 65k from 84k in the previous twelve months. This is the lowest number of immigrants since 2013. It was primarily driven by a fall in migrants from outside the EU and UK which dropped from 30k to 14k. There was also  a marked increase in outward migration and reduced inward migration of  EU 15-27 nationals (the former ‘accession States’). This combination of flows  likely reflects particular employment concentrations in areas of the economy most affected by health-related restrictions (e.g hospitality, construction).

Emigration by Irish nationals eased from 28k to 23k, presumably reflecting travel related restrictions while immigration picked up modestly to 30k from 29k leading to the most positive balance between these two aggregates since 2009.

The particular combination of migration flows seen in the past year may be a source of some mismatches in both the jobs market and the housing market in the next year or two. In the jobs market, it may heighten skill shortages in some areas as well as potentially increasing the jobless rate among younger age-groups. In the housing market, skill shortages may curb the rate of increase in new output while it could also have some measured impact on average household size and vacancy rates. We should also caution that revisions following previous Censuses suggest these annual data tend to underestimate the impact of net inward migration on Ireland’s population growth. 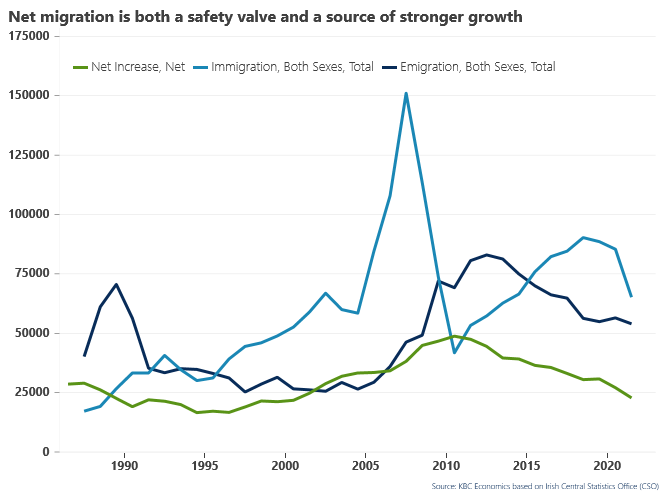 The 2021 data also show a continuing marginal slowdown in the pace of ‘natural’ population growth, i.e. the balance between births and deaths (23k v 27k or 0.5% v 0.6% previously). Again, we would point out that the ‘natural’ increase in Ireland’s population of +0.5% in 2021 contrasts with a decline of 0.3% for the EU27. According to Eurostat, only 7 of the EU 27 recorded more births than deaths in the past year and Ireland had the fastest natural increase among that group.

As the diagram below shows, there has been a trend easing in births  in Ireland since their 2010 peak but the swings in this metric hint at some potential for sustained solid increases into the medium term. In contrast to other aggregates, the trend in deaths through the past couple of decades has been relatively stable and was not markedly altered by the coronavirus. This is not to understate the extraordinary impact of the pandemic whose impact could alter the path of births as well as deaths in coming years as complex effects on broader health conditions and social habits play out. 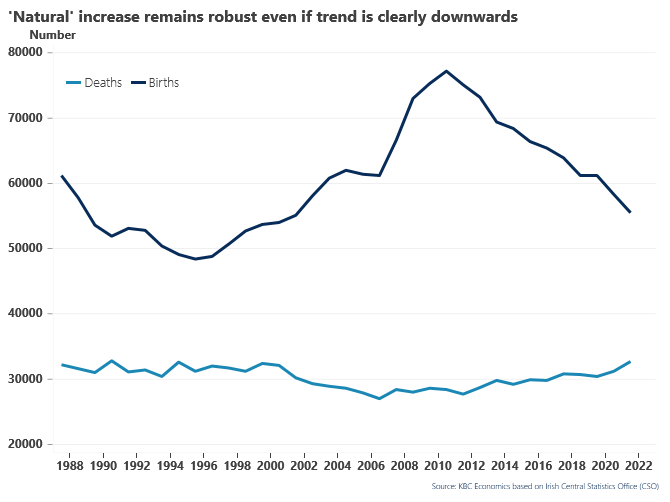